Udder quality represents one of the most important convenience traits in commercial beef production. Cows with good udder quality not only take less labor but also may have improved longevity due to lower incidence of mastitis or injury.

Seedstock producers should manage udder quality closely, says Bob Weaber, Kansas State University. “Your commercial customers expect trouble-free cattle when they make a purchase at your farm or ranch. Don’t give your customers a reason to buy genetics from another source to ‘clean up’ udders produced by your bulls.”

Cows with good udder quality not only take less labor but also may have improved longevity due to lower incidence of mastitis or injury. “Poor udders, especially large teat size, may delay timely colostrum intake by calves, resulting in poorer transmission of passive immunity,” Weaber explains.

Hereford breeders are encouraged to report udder scores to the American Hereford Association (AHA) to be utilized in genetic evaluation.

In July 2008 the Beef Improvement Federation (BIF) adopted a two-score system for evaluating udders. The AHA Board of Directors followed suit and adopted the same system during its August 2008 meeting.

Udder and teat quality are two of the most important functional traits. Udder and teat soundness are a concern for a number of reasons:

Scores range from 9 (Very Small) to 1 (Very Large, balloon shaped) and are subjective assessments of teat length and circumference. Oversized teats are difficult for newborn calves to nurse and the calf may not receive adequate colostrum, which could lead to a higher incidence of scours or decreased immunity levels in the newborn calf. In Canadian studies, cows with more desirable teat scores had calves that nursed sooner after birth.

Scores range from 9 (Very Tight) to 1 (Very Pendulous) and represent assessments of udder support. Weak udder suspension results in pendulous udders that make it difficult for a calf to nurse. Weak suspension in the udder indicates a lack of support in the ligament that ties the udder to the cow’s body wall. Over time, weakness in this ligament will allow the udder to hang down too far from the body and may subject the udder to serious problems and increased potential for injury.

Udder and teat scores should be taken (on the weakest quarter) within 24 hours of calving. Scores should preferably be taken by the same person throughout the calving season.

With this system, producers score both teat size and udder suspension. The scores for both characteristics range from 1 to 9.

A two-score system allows independent evaluation of teat size and suspension characteristics. While there is a general trend for cows with large teat size to also have poorer suspension, this is not always the case. The independent scoring of the two important udder quality traits allows more precise measurement of each trait. Even though these scores are subjective, they’ll do a better job documenting variation in udder quality than a single-score system. When the two scores are used, the heritability estimates for each trait should be higher due to increased precision of measurement.

Producers should get in the habit of scoring udders when they collect calving ease data. Until you get comfortable with the scoring system, tape a scoring guide to your clipboard or reduce on a copy machine and tape in your ‘red book’ for use in the field. Try to get as close as you can to the guide and be as consistent as possible.

Once you do it for a while, you’ll start picking out the really good ones and really bad ones easily. Be honest with yourself and use as much of the scale as needed. If she’s a ‘1’ on suspension and ‘1’ on teat size, give the scores. Your customers expect it! 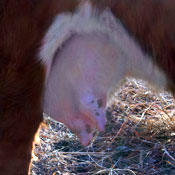 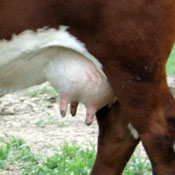 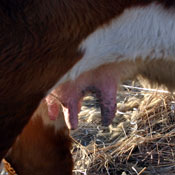 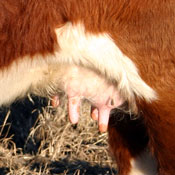 According to Jack Ward, AHA executive vice president, with the new system, breeders will list the score in the same field used previously, but instead of recording one score, they will input the two digits. The first digit will be the udder suspension (attachment) score, and the second digit will be teat size. For example, if a cow has an attachment score of 7 and a teat size of 5, the breeder will record 75 in the “dam udder score” column.

Research shows udder and teat characteristics are heritable; thus, change can be made through selection.

Consistent and steady progress can make dramatic improvements in udder quality. Help yourself and your customers by selecting for and culling on udder quality. Improving and monitoring udder traits will pay dividends in the long run.

Udder and teat scores should be taken (on the weakest quarter) within 24 hours of calving. Scores should preferably be taken by the same person throughout the calving season.

With the release of the spring 2015 Pan-American Cattle Evaluation (PACE), the AHA released two new expected progeny differences (EPDs) for udder quality. The two traits — udder suspension (UDDR) and teat size (TEAT) — were first released on the web. You can find them by going to Hereford.org and clicking on “EPD Search.” They are located in the EPD trait box positioned right after maternal cow weight (MCW).

This first release will be the trait by itself with no correlations to other traits, and there will not be a genomic impact with genomic enhanced-expected progeny differences (GE-EPDs). There were around 200,000 udder observations included in the first evaluation, and the heritability for both UDDR and TEAT is about .34, which makes this trait fairly highly heritable, so genetic progress can be made rather quickly.

The correlation between the two scores and one is .72, so it makes all udder scores useful in this evaluation. This EPD can be used the same as other EPDs and will allow you to compare animals and, most importantly, has the potential to change udder quality between sire groups. This scoring system is not concerned with milk flow or production; those will be measured with the weaning weight (WW) and milk and growth (M&G) EPDs. All we are looking at with this trait is the type of udder and teat.

These are important traits to analyze because commercial producers demand genetics that are problem-free. The loss of time, longevity and calf performance due to a poor quality udder cannot be tolerated.Remember that it is important to continue to collect udder scores within 24 hours of calving — the closer to calving time, the better. It is also important to understand that there is no perfect score, but it is the ranking and the differences within the herd that are important.