Improved reproduction and feed efficiency are two goals all cattle producers strive to attain. They are also two of the harder goals to measure. Producers spend hours looking for ways to improve conception and herd productivity.

An easy tool available to assist producers in the evaluation process of their cow herds is body condition scores (BCS). These scores allow producers to achieve optimum reproduction level and reduce feed costs.

“Body condition scoring is an easy method to assess the nutritional status of the herd and the impact of an operation’s nutritional program,” says John Hall, Virginia Polytechnic Institute and State University Extension beef specialist. “By using body condition scoring at critical times, cattlemen can make decisions on when to supplement. Also, considerable research indicates that body condition score before calving and during the breeding season are directly related to reproductive efficiency.”

“This data should be collected because it will give us an opportunity to look at some cow maintenance issues, which, in turn, could be directly related to fertility and longevity,” says Jack Ward, AHA executive vice president. “We do calculate a mature weight EPD and we use this data in our current indexes.”

“This will be a trait that could really prove to be important to the genetic analysis,” he adds. “We are continually looking at ways to improve efficiency in the cow herd, and this data could be very important in finding the genetics that will make the proper changes.”

Hall has taught body condition scoring to students and producers for several years, conducting workshops and research on the subject. He says the scores are a visual estimate of body energy reserves, so a trained eye and a notebook are all that is really needed when scoring cows. He does encourage producers to utilize reference publications before starting the process.

The most common BCS system ranks cows from 1-7 (See Figure 2).

Hall says for the novice, it is easier to learn the process if cattle are run through the chute and key areas of the cow are examined closely and felt. The key areas include hooks, pins, ribs, backbone and tailhead. After the cow is examined in the chute and a score is given, based on palpating the key areas, the cow should then be viewed after being let out of the chute. This final observation will help train the novice’s eye. An experienced person helping during the first body condition scoring session is a great asset, Hall adds.

“The rancher who is experienced in body condition scoring can walk, drive or ride through a herd of cows and body condition score them by sight,” Hall says. “Alternatively, the cows can be brought to a corral for easier viewing.”

For utilization in Hereford cattle evaluation, the key time to collect and record BCS is at weaning, but the process of evaluating cow BCS is something that is useful year-round. According to Hall, there are four key times to BCS cows:

“From a management perspective, 60-90 days before calving is the most important time,” Hall says. “Because of the clear relationship between BCS at calving and rebreeding success, we want to make sure cows are on target to calve in the ideal BCS. If they are too thin at this time, producers still have time to increase BCS on cows before calving.

“The second most important time to score cows is at weaning. The BCS at weaning indicates the ability of the cow to adapt to the environment or the adequacy of the nutrition program. Also, weaning BCS can be used to determine which cows need to gain weight between weaning and calving. Finally, from a genetic evaluation perspective, BCS at weaning will be used to adjust the cow body weight at weaning to estimate mature cow size,” Hall explains.

Evaluating BCS is something everyone who helps on a farm or ranch should be trained to do, but for reporting purposes, it’s best for consistency if one person scores all the cows reported to the AHA.

BCS allows producers to sort cows according to nutritional needs, thereby improving the efficiency of their nutrition program. This is possible because of the strong relationship between body condition and weight change.

Hall explains that although it is critical to have cows in good condition at calving, BCS at calving can be used to plan the nutrition program from calving to breeding. Cows that are thin at calving but gain weight from calving to breeding have increased pregnancy rates compared to cows that remain thin. BCS at the beginning of the breeding season is an indicator of breeding season success. Cows that are thin at the beginning of the breeding season will respond to increased nutrition, but the effect on pregnancy rates may be limited.

Research shows that cows in BCS 5-6 at calving and breeding will have higher pregnancy rates than cows that are in BCS lower than 5. The critical body condition for first-calf heifers is BCS 6-7.

Hall says, aside from the optimum BCS differences, there is little difference in body condition scoring first-calf heifers, young cows and mature cows. “Older cows (older than 10 years) create a unique situation because the natural ‘sagging’ of the ribs and body tends to make backbone, hips and ribs more apparent in older cows,” he says. “Cattlemen should concentrate on fat deposits in the brisket, tailhead and pins of these cows when making a BCS determination.”

Thin cows (BCS 4 and less) need to be managed to gain weight precalving and from calving to breeding in order to increase reproductive success, Hall says. Cattlemen may have to feed thin cows separately from the main herd to more economically increase BCS on these cows.

To improve body condition, Hall says there’s not a specific technique or feeding strategy; however, there are guidelines to increase BCSs.

He encourages cattlemen to consult their local Extension specialist or nutritionist  to determine the best nutrition program to fit their environment and available resources.

Research shows that failure to monitor body condition prior to key production periods can be disastrous to cow herd productivity. Take the time to collect weights and score cows each fall, and then use the data to take action and improve the productivity of your herd and your customers’ herds.
Figure 2: Dam’s body condition score reference chart 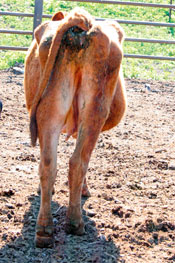 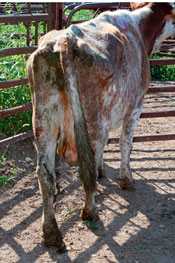 BCS 3 – Thin:
Ribs are less sharp but definable. Some fat on spine.

BCS 4 – Borderline:
Ribs not obvious. Some fat over ribs and hip bones. The backbone can be identified but feels rounded, not sharp.