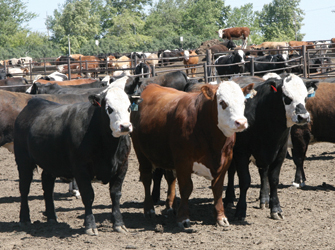 Calves sired by Hereford bulls have a $30 per head documented advantage in feedlot profitability and 7% advantage in fertility when compared to Angus-sired calves, according to a recent research study.

This advantage was documented during a three-year, real-world commercial heterosis project comparing progeny by Hereford and Angus bulls when crossed on Angus-based cows. The study also documented a maternal advantage of 7% higher pregnancy rate when comparing the Hereford-sired females to Angus-sired females.

“The most notable and dramatic difference was the lower feed conversion for the Hereford-sired calves over all three years,” explains Dave Daley, California State University, Chico associate dean and farm administrator. “This fact, coupled with the other feedlot traits, resulted in a significantly lower total cost of gain and breakevens for the Hereford-sired cattle.”

To start the project in 2005, Lacey Livestock identified 400 Angus-based cows that were mated randomly to 10 Hereford bulls or 10 Angus bulls. In years two and three the project was expanded to include 600 cows and 15 bulls of each breed. All calves were identified with electronic identification (EID) tags and DNA samples were taken to determine parentage. All cattle had equal access to comparable feed resources and management in relatively harsh environments. The differences in weaning performance, feedlot performance, carcass value and overall profitability were measured on the Angus- and Hereford-sired calves.

Because of the length of the project, researchers were only able to collect limited data on reproductive performance. Daley, who led the research project, says this is an area where producers can anticipate the most dramatic response to crossbreeding. “For the majority of cow-calf producers the effect of maternal heterosis is critical to overall profitability,” he adds.

Pregnancy rates on yearling heifers that had been identified back to Hereford or Angus sires were collected in year two and three of the study. In both instances, there was a 7% advantage in pregnancy to the Hereford-sired cattle (93% vs. 86%) in a relatively short breeding season where heifers were bred with artificial insemination.

“The baldie females are the biggest pay off for us participating in the project,” says Mark Lacey of Lacey Livestock. “It is allowed us to get some heterosis back in our cow herd. In the cattle business, fertility and longevity are what makes us money.

“We want to continue to produce more baldie females,” Mark adds. “As range cows go, I think the Hereford female is a superior range cow and makes a great mother.”

As a result of the project, Mark says his family is continuing to use the Hereford bulls that remain in their bull battery. They also artificially inseminated their black replacement heifers, nearly 250, to two calving-ease Hereford bulls.

“The Harris project includes a real-world economic analysis that favors crossbreeding for the commercial cow calf producer in our current market structure,” Daley summarizes. “The economic data suggest crossbreeding has the potential to significantly boost return in a vertically coordinated marketing system.”