The American Hereford Association Annual Membership Meeting and Conference is held each fall in Kansas City, Mo., and brings together the membership for a trade show, educational sessions, Honorees Reception and meeting where three new members of the Board of Directors are elected.

The 2022 AHA Annual Membership Meeting and Conference will be held Oct. 21-23 at the Loews Kansas City Convention Center in Kansas City, Mo. To download the schedule, click here. 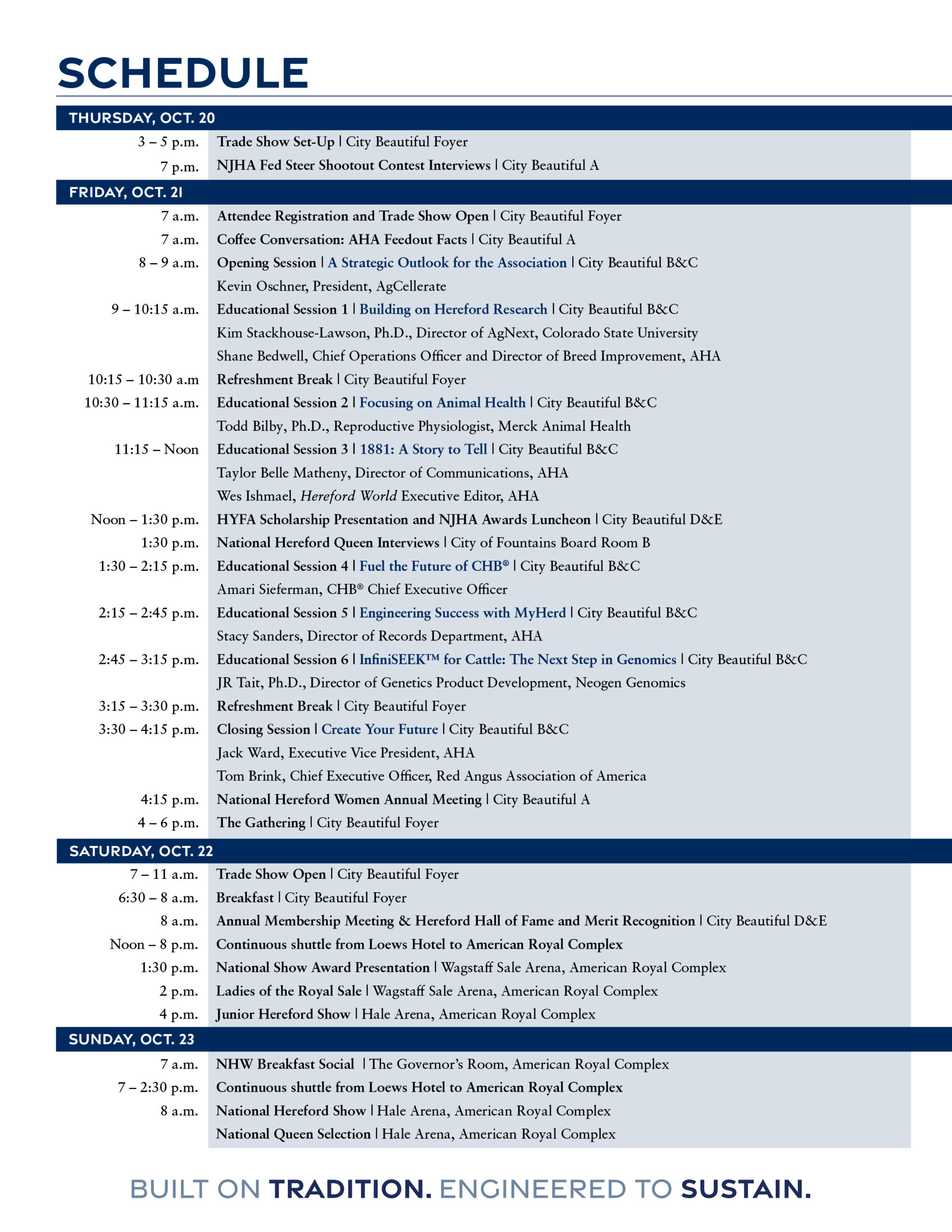 Garrett Parsons, Consulting Nutritionist, Midwest PMS
Trey Befort, Director of Commercial Programs, AHA
Join those involved with the Hereford Feedout Programs for coffee and donuts to kick off the educational forum. The conversation will entail information about past programs as well as tips to prepare for the 2023 programs. Adult and junior members are invited to attend the event.

A Strategic Outlook for the Association | 8 a.m.

Kevin Ochsner, president, Agcellerate
Developing the AHA’s new five-year strategic plan included the candid, gracious input of industry leaders from every sector of the beef industry, as well as Hereford breeders. Find out what’s in the plan, how it can help you and how you can ensure its success.

Kim Stackhouse-Lawson, Ph.D., Director of AgNext, Colorado State University
Shane Bedwell, Chief Operations Officer and Director of Breed Improvement, AHA
Learn more about the Hereford research initiatives that will further leverage the Hereford breed’s strengths to serve the evolving beef industry and the next generation of consumers. This session will detail two exciting current research projects: maternal efficiency with the University of Illinois and the genetics of sustainability with Colorado State University.

Todd Bilby, Ph.D., Director of Dairy Technical Sales, Merck Animal Health
Reproductive hormones and estrus synchronization offer a myriad of benefits in both cows and heifers bred through AI or natural service. Advantages include shortening the calving interval to increase pounds of beef at weaning and to improve replacement heifer fertility. Learn more about these benefits as well as the use of hormones to improve embryo transfer pregnancy retention.

Meet the six Hereford breeders vying for a position on the American Hereford Association (AHA) Board of Directors.

Jim Coley is a third-generation Hereford breeder from Lafayette, Tenn. Jim and his wife, Kay, married in 1980. They have two adult children, Denise and Michael, and four grandchildren. Coley Hereford Farm began with Jim’s grandfather, dad and uncle as V.H. Coley and Sons in 1938. They had successful production sales from 1952 through 1978 before dispersing the original herd in 1978 after Jim’s father passed away. Jim started his own herd of Hereford cattle after college graduation in 1976.

As a youth, Jim was active in the Tennessee Junior Hereford Association and 4-H. He assisted with all aspects of the farm. While attending the University of Tennessee, Jim was active in clubs, worked on the university’s cattle farm and participated on the livestock and meats judging teams. Jim served on the National Junior Hereford Association (NJHA) board from 1973-1976. After graduating with an animal science degree, Jim spent nine years working as a farm manager for farms in Tennessee, Kentucky and Georgia. In 1985, he moved back to Tennessee and began a 30-year career working in sales and management at farmers co-ops. He retired in 2017 and works full-time on his cattle operation.

In 2017, Jim moved his cattle back to the “home place” just east of Lafayette, Tenn. Today, his herd includes 50 cows, mostly Line 1, both polled and horned, in addition to five to 10 contract ET calves. Coley Hereford Farm produces commercial bulls, bred heifer replacements, and bulls for use in their own and other seedstock operations. Jim maintains complete performance records and uses genomic testing. The calves not sold for breeding are fed and sold directly to consumers as freezer beef.
Candidate Speech 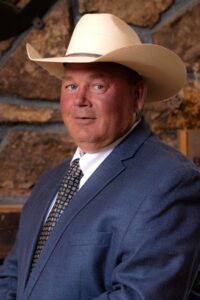 Hampton Cornelius is a family partner, along with his mother, Jane Evans Cornelius, of Coyote Ridge Ranch in LaSalle, Colo. He has been married to his wife, Kay, for 29 years, and they have a 22-year-old son, John Hampton. Coyote Ridge Ranch (CRR) is a purebred Hereford cattle ranch with an extensive hay operation located on the northern High Plains near the Rocky Mountains. They develop Hereford bulls suitable for commercial and seedstock customers. They run 170 registered Hereford pairs with their noted CRR cow families serving as the hallmark of their operation. The ranch also markets embryos, high-quality show heifers and purebred replacement females. CRR produces balanced genetics — maternally efficient, functional, high-quality females, which produce quality replacements and marketable steers with highly accepted carcass traits. This is done through balanced trait selection — utilizing performance records and expected progeny differences (EPDs).

Bulls are genomic tested, and yearlings are ultrasounded for carcass measurements. CRR has retained ownership on all steers for three decades. CRR has provided the American Hereford Association (AHA) with 30 years of carcass performance data on their steers, and they have been recognized as a Whole Herd Total Performance Records (TPR™) Gold Hereford Breeder. Hampton’s cattle have topped national Hereford shows, and he is proud that the CRR National Western Stock Show pen show entries have been purchased by fellow Hereford breeders across the country.

Hampton was active in the National Junior Hereford Association (NJHA), 4-H and FFA as a youth. He attended Northeastern Junior College and Colorado State University (CSU) and judged livestock at both. At CSU, Hampton received the Tom Blackburn Award for being an outstanding member of the livestock judging team. Hampton has judged numerous shows across the U.S., and in Canada and Uruguay. 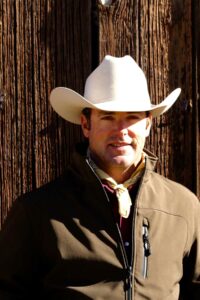 Austin Snedden is a fifth-generation rancher from Maricopa, Calif., where his family has been raising cattle in the same county for more than 150 years. Snedden Ranch was founded in 1867 by Anna and Samuel Snedden and has been passed down through the generations. Austin grew up on the ranch in southwest Kern County and graduated from Azusa Pacific University in 2005 with a degree in business administration. Ranching is Austin’s full-time job; Austin and his wife, Sarah, partner with his parents, Richard and Susie, to operate Snedden Ranch.

Austin and Sarah met in college and married in 2004. They have four children: Ryah, Rainey, Sonora and Ezra. Snedden Ranch is family business with family members of all ages working in every aspect of the operation. Snedden Ranch consists of 350 to 400 commercial cows, 120 Hereford cows, and 40 Red Angus cows. The Snedden family raises bulls for their commercial herd and their annual production sale, held on the second Saturday of October every year. In addition to the cow herd and hosting a production sale, Snedden Ranch markets a select group of commercial replacement females every year. Their steer calves are merchandised at weaning or yearling age and sold off the ranch through auction and video markets.

Snedden Ranch has raised primarily Hereford cattle for more than 100 years and registered its first cattle with the American Hereford Association (AHA) 50 years ago in 1972. The ranch was recognized as a Whole Herd Total Performance Records (TPR™) Gold Hereford Breeder by the AHA in 2022. Austin and Sarah served as advisors for the California/Nevada Junior Hereford Association in 2017 and 2018. Austin has been involved with the Kern County Cattlemen’s Association for many years and served as president from 2014 to 2015. He was appointed to serve on the Trump Administration’s Rural and Agriculture Advisory Committee. Austin served as a delegate for the California Republican Party from 2021 to 2022 and is a contributing columnist to the Valley Ag Voice, a regional agricultural publication. Additionally, Austin was recognized as the Kern County Cattleman of the Year in 2020, and Snedden Ranch was recognized in 2013 as California’s 18th Senatorial District’s Small Business of the Year.
Candidate Speech 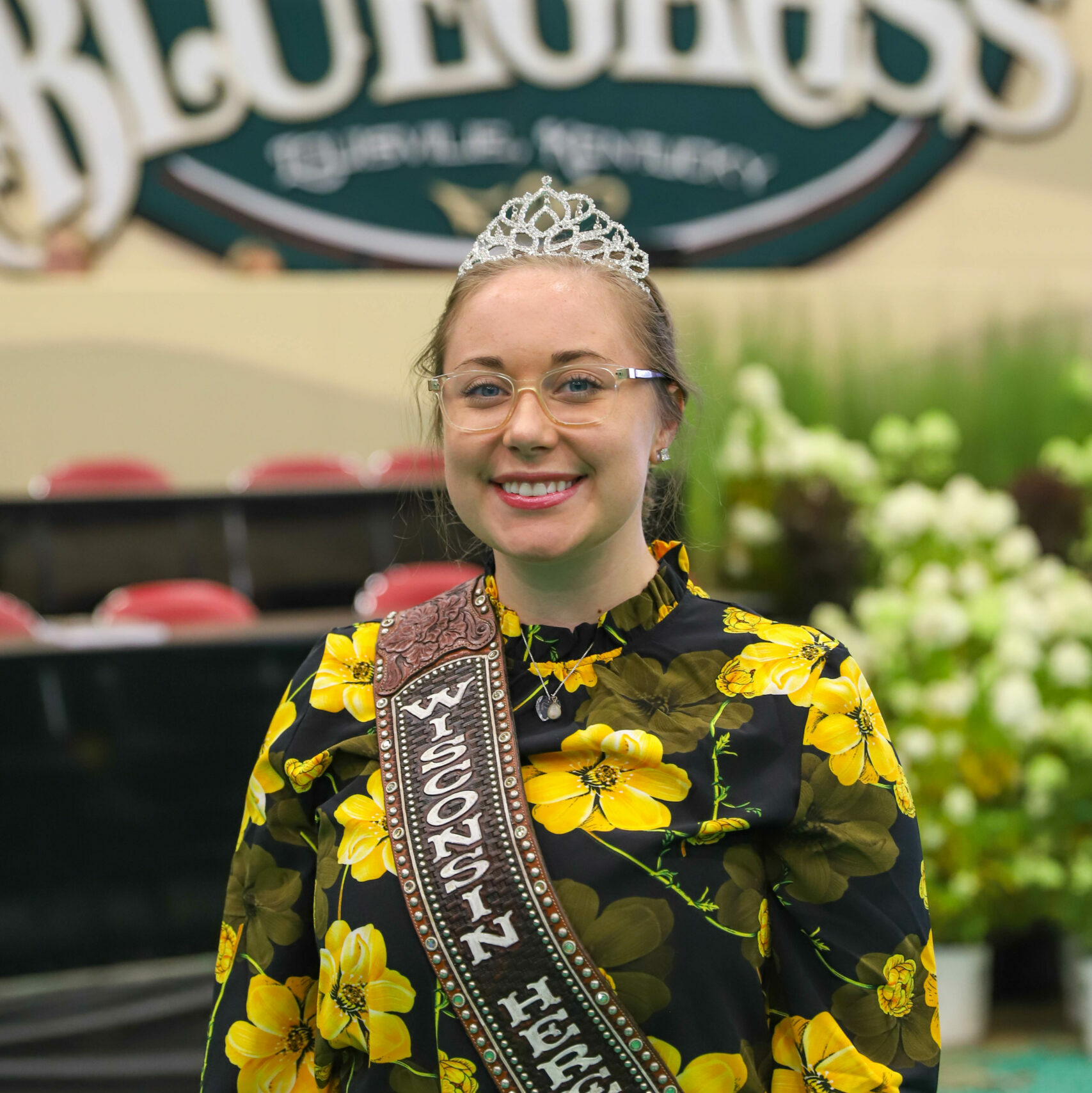 Madison Katzenberger is the daughter of Eric and Rosie Katzenberger. She recently graduated from the University of Wisconsin Platteville (UWP) with a bachelor’s degree in animal science and a minor in Spanish. While at UWP, Madison served as the Block and Bridle Club president, and served on the Pioneer Showdown Beef Show Committee as chair and public relations chair. She was a member of the homecoming court her senior year and volunteered as a manager for the men’s baseball team. Madison has been a member of the Wisconsin Junior Hereford Association for 15 years and is currently serving as the association president. She has attended JNHE 14 times, and she has participated in a broad array of activities. She was voted Outstanding State Junior representing the state of Wisconsin at the 2022 JNHE. Her FFA achievements include the State Degree and Gold Section Winner for Beef Entrepreneurship. Outside the showring, Madison enjoys playing music for her church and sewing banners to hang in the sanctuary. Madison is currently employed as an embryologist for Boviteq USA in Madison, Wis.

Each state Hereford association elects delegates to represent their association at the American Hereford Association (AHA) Annual Meeting. Delegates vote on the candidates competing for positions on the Board of Directors. Below are this year’s delegates.