KANSAS CITY, Mo. — Kyle Lemmon, Manchester, Md., was honored as the 2023 Hereford Herdsman of the Year at the National Hereford Show during the third annual Cattlemen’s Congress hosted in Oklahoma City, Okla. After votes were cast by fellow Hereford herdsmen and breeders, the award was announced between the selection of the grand champion horned and polled Hereford females on Jan. 7 in Jim Norick Arena.

Every year, the Hereford Herdsman of the Year award honors an outstanding herdsman in the Hereford breed. Lemmon owns and operates Lemmon Cattle Co. alongside his wife, Nicole, daughter, Blakely, and son, Kashton. Lemmon’s passion for the Hereford breed began at 9 years old; since then, he has focused on raising high-quality cattle. He believes the Hereford industry has incredible value and is honored to be a part of the breed. He spends countless hours in the barn, raising and managing his herd and completing day-to-day operations. 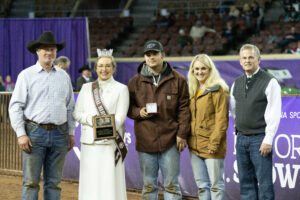 Over the last decade Lemmon has devoted considerable time to studying genetics and matings to breed elite females and influential bulls. Lemmon has been successful at some of the largest national shows, including the National Western Stock Show (NWSS), North American International Livestock Expo (NAILE), Keystone International Livestock Expo (KILE) and VitaFerm® Junior National Hereford Expo (JNHE), along with exhibiting previous show heifers and show bulls of the year. Lemmon and his family bred and exhibited the 2022 KILE third overall bull and champion Hereford bull, along with the 2022 Maryland State Fair supreme champion bull and champion Hereford bull. Additionally, Lemmon was named the 2022 premier breeder at the KILE and Maryland State Fair. Lemmon Cattle Co. had numerous division champions in 2022 at the JNHE, American Royal and KILE. Additional highlights include the 2019 NAILE reserve champion Hereford bull and the 2019 KILE reserve champion bull. He also bred the 2020 NWSS reserve champion polled Hereford female.

Lemmon’s work ethic, respect, integrity and accountability are second-to-none. He ensures his customers have the best experience in the showring and provides them with great genetics to make exceptional breeding pieces.

###
The American Hereford Association, with headquarters in Kansas City, Mo., is one of the largest U.S. beef breed associations. The not-for-profit organization along with its subsidiaries — Certified Hereford Beef (CHB) LLC, Hereford Publications Inc. (HPI) and American Beef Records Association (ABRA) — provides programs and services for its members and their customers, while promoting the Hereford breed and supporting education, youth and research. For press releases and photos, visit Hereford.org/media.