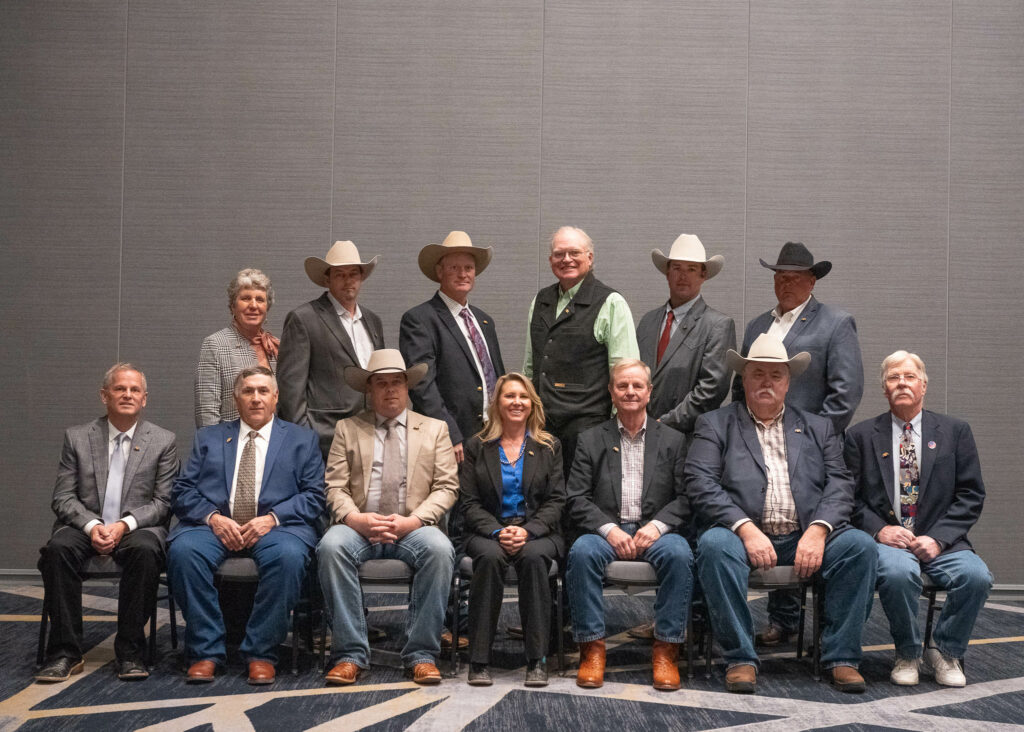 KANSAS CITY, Mo. — Bill Goehring, Libertyville, Iowa, was announced as the new president of the American Hereford Association (AHA) during the Annual Membership Meeting Oct. 22 in Kansas City, Mo. The Goehring family began in the Hereford business in 1973. Goehring Herefords’ registered cow herd consists of 150 spring-calving cows and 50 fall-calving cows, and their commercial Angus herd includes 400 spring-calving cows and heifers. The Goehrings breed 100 registered heifers every year as well as 450 black and black-whiteface heifers for their annual sale, held the first Wednesday in December.

Additionally, they background 800 to 1,000 steers and finish 500 cattle at custom yards. Goehring grew up on a small farm in southeast Iowa. He graduated from Iowa State University with a degree in animal science and then attended the World Wide College of Auctioneering. In August 1986, Bill’s family purchased a local livestock market in Keosauqua, Iowa.

At the time the market needed a lot of work, so their first priority was building a feeder pig sale. The sale grew quickly, and for more than 15 years, the Goehrings sold 1,000 to 2,000 pigs weekly. When the hog business consolidated, they began to push their cattle sale, and through relationships built in the feeder pig sale they were able to gain strength in the competitive cattle market. They now market 40,000 head annually in addition to market hogs, sheep, goats and hay.

As the sale grew, so did the Goehring family — Bill and his wife, Becky, have four sons — Curtis (Lauren), Lucas (Cody), Ted (Rachelle) and Colby (Hannah) — and five granddaughters. Growing up, Bill was very active in junior leadership. He held positions on the board of the Iowa Junior Hereford Association, where his parents served as advisors for most of his junior career. He also served on the American Junior Hereford Association board of directors. Bill went on to serve on the board of directors for the Iowa Hereford Association and was president for two years. In 2013 and 2015, he had the honor of being asked to judge the national Hereford show in the Yards at the National Western Stock Show.

Wyatt Agar, Thermopolis, Wyo., was selected to serve as the 2023 vice president.  Raised on a multigenerational operation based in eastern Oregon, Wyatt Agar is a manager and a partner in Durbin Creek Ranch, Thermopolis, Wyo., and Washakie Feeders, Worland, Wyo. The seedstock division runs 500 head of females, where artificial insemination (AI) and embryo transfer (ET) technologies are used to produce three-fourths and full siblings. At weaning half of the heifers are retained for the cow herd while the other half are marketed as bred females. Bulls are sold as 2-year-olds in a February production sale, which also includes baldy replacement females and ranch geldings. Calves that do not make the bull pen are fed and used to collect data on the sire groups.

The commercial division runs approximately 1,200 Angus and Red Angus mother cows that are exposed to Hereford bulls to produce first generation (F1) calves. The program collects data from birth to harvest on sires used in the seedstock division. At weaning females are sold in the February production sale. Light steers go to the operation’s stocker program in Oregon, and heavy steers are backgrounded at Washakie Feeders along with 5,000 to 6,000 of the ranch’s bull customers’ calves. These steers are fed to 900 pounds and are finished in Colorado.
Wyatt and his brother grew up on the family’s cow-calf and stocker operation in Oregon, which they later expanded to include the Wyoming divisions. Wyatt and his wife, Joey, strive to raise their children, Rylee, Taylor and Cooper, in the same manner — working side-by-side with family to produce high-quality beef cattle off the land and backed by the cowboy ethic.
As a junior, Wyatt was the vice president of the Oregon Junior Hereford Association. Wyatt served as a senator in Wyoming’s Senate District 20 and was the first freshman senator in the state’s history to serve on the Appropriation Committee and the Select Capital Finance Committee. Prior to, he served a term as the vice chairman and a term as secretary of the Hot Springs County Republican Party. Wyatt is a former vice chairman of the Transportation Committee, a board member of the Hot Springs County Weed and Pest, and a deacon at the First Baptist Church of Thermopolis.

Jim Coley is a third-generation Hereford breeder from Lafayette, Tenn. Jim and his wife, Kay, married in 1980. They have two adult children, Denise and Michael, and four grandchildren. Coley Hereford Farm began with Jim’s grandfather, dad and uncle as V.H. Coley and Sons in 1938. They had successful production sales from 1952 through 1978 before dispersing the original herd in 1978 after Jim’s father passed away. Jim started his own herd of Hereford cattle after college graduation in 1976.

As a youth, Jim was active in the Tennessee Junior Hereford Association and 4-H. He assisted with all aspects of the farm. While attending the University of Tennessee, Jim was active in clubs, worked on the university’s cattle farm and participated on the livestock and meats judging teams. Jim served on the National Junior Hereford Association (NJHA) board from 1973-1976. After graduating with an animal science degree, Jim spent nine years working as a farm manager for farms in Tennessee, Kentucky and Georgia. In 1985, he moved back to Tennessee and began a 30-year career working in sales and management at farmers co-ops. He retired in 2017 and works full-time on his cattle operation.

In 2017, Jim moved his cattle back to the “home place” just east of Lafayette, Tenn. Today, his herd includes 50 cows, mostly Line 1, both polled and horned, in addition to five to 10 contract ET calves. Coley Hereford Farm produces commercial bulls, bred heifer replacements, and bulls for use in their own and other seedstock operations. Jim maintains complete performance records and uses genomic testing. The calves not sold for breeding are fed and sold directly to consumers as freezer beef.

Hampton Cornelius is a family partner, along with his mother, Jane Evans Cornelius, of Coyote Ridge Ranch in LaSalle, Colo. He has been married to his wife, Kay, for 29 years, and they have a 22-year-old son, John Hampton. Coyote Ridge Ranch (CRR) is a purebred Hereford cattle ranch with an extensive hay operation located on the northern High Plains near the Rocky Mountains. They develop Hereford bulls suitable for commercial and seedstock customers. They run 170 registered Hereford pairs with their noted CRR cow families serving as the hallmark of their operation. The ranch also markets embryos, high-quality show heifers and purebred replacement females. CRR produces balanced genetics — maternally efficient, functional, high-quality females, which produce quality replacements and marketable steers with highly accepted carcass traits. This is done through balanced trait selection — utilizing performance records and expected progeny differences (EPDs).
Bulls are genomic tested, and yearlings are ultrasounded for carcass measurements. CRR has retained ownership on all steers for three decades. CRR has provided the American Hereford Association (AHA) with 30 years of carcass performance data on their steers, and they have been recognized as a Whole Herd Total Performance Records (TPR™) Gold Hereford Breeder. Hampton’s cattle have topped national Hereford shows, and he is proud that the CRR National Western Stock Show pen show entries have been purchased by fellow Hereford breeders across the country.
Hampton was active in the National Junior Hereford Association (NJHA), 4-H and FFA as a youth. He attended Northeastern Junior College and Colorado State University (CSU) and judged livestock at both. At CSU, Hampton received the Tom Blackburn Award for being an outstanding member of the livestock judging team. Hampton has judged numerous shows across the U.S., and in Canada and Uruguay.
He strongly believes in developing young people and promoting Hereford beef. CRR often provides a quality judging team workout and hosts the United States Meat Export Federation, National Cattlemen’s Beef Association and Colorado Beef Board tours. CRR has welcomed culinary experts, chefs, high school agriculture teachers and meat-buying delegations from China, Taiwan, Korea and other countries. When Hampton is not ranching or making hay, he enjoys fishing, camping, hunting, and spending time in the Colorado mountains with his family.

Austin Snedden is a fifth-generation rancher from Maricopa, Calif., where his family has been raising cattle in the same county for more than 150 years. Snedden Ranch was founded in 1867 by Anna and Samuel Snedden and has been passed down through the generations. Austin grew up on the ranch in southwest Kern County and graduated from Azusa Pacific University in 2005 with a degree in business administration. Ranching is Austin’s full-time job; Austin and his wife, Sarah, partner with his parents, Richard and Susie, to operate Snedden Ranch.
Austin and Sarah met in college and married in 2004. They have four children: Ryah, Rainey, Sonora and Ezra. Snedden Ranch is family business with family members of all ages working in every aspect of the operation. Snedden Ranch consists of 350 to 400 commercial cows, 120 Hereford cows, and 40 Red Angus cows. The Snedden family raises bulls for their commercial herd and their annual production sale, held on the second Saturday of October every year. In addition to the cow herd and hosting a production sale, Snedden Ranch markets a select group of commercial replacement females every year. Their steer calves are merchandised at weaning or yearling age and sold off the ranch through auction and video markets.
Snedden Ranch has raised primarily Hereford cattle for more than 100 years and registered its first cattle with the American Hereford Association (AHA) 50 years ago in 1972. The ranch was recognized as a Whole Herd Total Performance Records (TPR™) Gold Hereford Breeder by the AHA in 2022. Austin and Sarah served as advisors for the California/Nevada Junior Hereford Association in 2017 and 2018. Austin has been involved with the Kern County Cattlemen’s Association for many years and served as president from 2014 to 2015. He was appointed to serve on the Trump Administration’s Rural and Agriculture Advisory Committee. Austin served as a delegate for the California Republican Party from 2021 to 2022 and is a contributing columnist to the Valley Ag Voice, a regional agricultural publication. Additionally, Austin was recognized as the Kern County Cattleman of the Year in 2020, and Snedden Ranch was recognized in 2013 as California’s 18th Senatorial District’s Small Business of the Year.

The American Hereford Association, with headquarters in Kansas City, Mo., is one of the largest U.S. beef breed associations. The not-for-profit organization along with its subsidiaries — Certified Hereford Beef (CHB) LLC, Hereford Publications Inc. (HPI) and American Beef Records Association (ABRA) — provides programs and services for its members and their customers, while promoting the Hereford breed and supporting education, youth and research. For more information about the Association, visit Hereford.org.