Gelvin, King and Whitehead Inducted into Hereford Hall of Fame

The Hall of Fame honor annually recognizes breeders who have dynamically influenced the direction and advancement of the Hereford breed.

Odell Gelvin has spent a lifetime working in the Hereford breed, beginning when he was 12 years old working on the W.E. Harvey Ranch in Ada, Okla., before and after school. After his father’s death, he moved and began caring for the commercial herd and working in the show barn at the Colvert Ranch in Millcreek, Okla. Then, Odell worked in the Gus Delaney Ranch show barn in Ada until 1945, when he enlisted in the Navy.

After his service in the Navy, Odell returned to Oklahoma and married his high school sweetheart, Kate. Odell and Kate have three children: Ron, Linda and Susie. 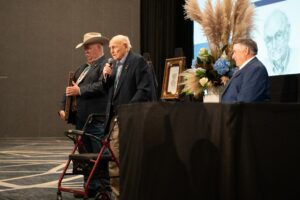 Odell went on to work for Edge Cliff Farms of Potosi, Mo., and Banning and Lewis in Colorado Springs, Colo. Following his work in Missouri and Colorado, he became the herdsman for Northern Pump Farms in McHenry, Ill., one of the largest Hereford breeders at the time. During his tenure at Northern Pump Farms, few herds were more competitive at national shows. Travelling the country via railcar, Odell fit and showed numerous champions, including the grand champion Hereford bull at the World Hereford Conference in Des Moines, Iowa. For years, through Odell’s skill as a fitter and showman, Northern Pump Farms attained success in the carload shows at the National Western Stock Show. Showing a carload consisting of 12 to 15 head was no small feat, and in 1961, Odell was selected as the Herdsman of the Year.

In the mid 1960s, Odell accepted a manager position with Ogeechee Farms in Fairland Oklahoma. Under his direction, Ogeechee Farms’ performance polled Hereford herd became a national leader. Odell was also instrumental in helping establish the Oklahoma Beef Testing Station in Stillwater, Okla. The center had a large impact on the Hereford breed, providing data on different sires.

During the twenty years he managed Ogeechee Farms, Odell bred, fit and showed both the Grand Champion Carload of Bulls and the Grand Champion Hereford Bull on the same year. He also won the premier exhibitor award at the National Polled Hereford Show.

Outside of his work as a herdsman, Odell judged livestock shows. Over two decades, Odell judged national Hereford shows across the U.S. and in Argentina and Venezuela.

Odell’s passion for the Hereford breed runs deep, and his impact will be felt for many generations.

Bill King started his Hereford herd as a highschooler in 1968 with the purchase of three heifers from Marshall Sellman. After graduation from high school, Bill attended New Mexico State University. Bill then returned to the family ranch, where he began buying feeder cattle and selling fat cattle for his family’s 16,000 head feedlot. Bill has three daughters: Becky and her husband, Tom; Jenny and her husband, Josh; Stacy and her husband, Anthony, and six grandchildren: Jordan, Abby, Cash, Charli, Hayden, and Lincoln.

For more than 100 years, the King family has been ranching in Stanley, N.M. King Ranch is a diversified operation consisting of 30,000 acres of pasture, 4,000 acres of farmland and about 1,200 registered Hereford, Charolais and Angus cows, along with 300 commercial cows. The ranch sells more than 350 bulls a year to mostly commercial producers and buys back customer cattle for finishing in the family-owned feedlot. Bill was honored as the New Mexico Cattlemen of the Year in 2010, his family was recognized as the New Mexico Ranch family of the year in 2015, and he was recognized as a Golden Breeder by the American Hereford Association in 2018. 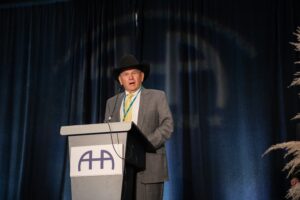 Bill comes from a long line of public servants; Bill’s father was governor of New Mexico for three terms. Bill currently serves on the Hereford Youth Foundation of America (HYFA) board of directors and the Hereford Legacy Fund board. An advocate for the beef industry, Bill is a past president of the American Hereford Association, New Mexico Cattle Growers Association and New Mexico Livestock Board. He’s a former regional vice president for the National Cattlemen’s Beef Association (NCBA), and a past board member for the Texas Cattle Feeders Association and Cattlemen’s Beef Board. Bill served on the Cattlemen’s Beef Board executive committee for four years. One of Bill’s daughters, Becky, currently serves on the AHA Board of Directors and Bill’s granddaughter, Abby, served on the National Junior Hereford Association (NJHA) board of directors.

The King Ranch has been featured in the BEEF Magazine Seedstock 100 for several years. Beyond the range, Bill’s cattle have experienced success at national shows across the country. Bill is an owner of numerous grand champions at the National Western Stock Show, Fort Worth Stock Show, American Royal, Arizona National, and New Mexico State Fair. He’s also an owner of several impactful bulls that didn’t step foot in the showring, like Loewen Genesis G16 ET and NJW 98S R117 Ribeye 88X ET.

Bill’s impact can be felt across all facets of the beef industry. He’s been a leader, public servant and influential voice for agriculture. His passion for Hereford cattle is second-to-none.

Loyd Whitehead has been ranching since the day he was born in Brady, Texas. Loyd’s grandfather, C.B. Whitehead, began breeding Hereford cattle in 1903. In 1958, Loyd bought Rocking Chair Ranch, and in 1963, Loyd began developing his herd of Hereford cattle. Since his initial purchase of Rocking Chair Ranch, Loyd has added ranches in several Texas counties. As of 2022, he has six ranches he dedicates his time to. Loyd and his wife, Carol, have two children and four grandchildren.

The Rocking Chair Ranch calves out cows in the spring and fall, and there are bulls for sale private treaty year-round. The ranch emphasizes fertility, structural soundness and udder development. The herd consists of mostly L1 Domino and Canadian-bred cows. Whitehead bulls are popular with ranchers in southern Texas utilizing Brahman cows; the bulls are proven to add value to the F-1 programs. Additionally, the Whiteheads exhibited cattle for many years and had a champion at every major show in the country.

Loyd is passionate about the youth of the Hereford breed. He funded and hosted the 1985 All American Hereford Expo at his ranch in Fort McKavett, Texas, and he hosted the event again in 1994. Loyd founded the Whitehead Ranches Scholarship and served on the Hereford Youth Foundation of America board of directors for eight years. He has received the Golden Bull honorary lifetime membership from the National Junior Hereford Association.

Loyd’s Rocking Chair Ranch has won numerous awards for conservation. A true public servant, Loyd is dedicated to the Hereford breed and improving the world that surrounds him.

The American Hereford Association, with headquarters in Kansas City, Mo., is one of the largest U.S. beef breed associations. The not-for-profit organization along with its subsidiaries — Certified Hereford Beef (CHB) LLC, Hereford Publications Inc. (HPI) and American Beef Records Association (ABRA) — provides programs and services for its members and their customers, while promoting the Hereford breed and supporting education, youth and research. For more information about the Association, visit Hereford.org. For pictures and additional news releases, visit www.hereford.org/media.