“Strategy is about earning the right to win,” Kevin Ochsner, Agcellerate president, told the crowd of Hereford breeders and guests during the opening session of the American Hereford Association (AHA) Educational Forums in Kansas City, Mo. 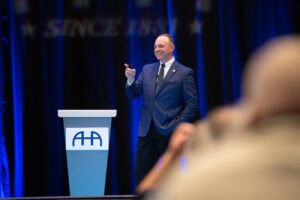 Ochsner shared the process that powered the development of the new five-year strategic plan adopted by AHA. In doing so, he also set the stage for the educational sessions that followed, building momentum throughout the day.

Participants heard about ongoing AHA research with the University of Illinois aimed at comprehensively detailing the economic value of maternal heterosis in Hereford-sired F1 baldies.

Other forums included a look at harnessing reproductive technology to improve the bottom line of cow-calf operations; new genomic technology; and the growing need for increased use of heterosis within the cow-calf sector.

Tomorrow morning at 8 a.m. the AHA annual meeting will recognize the 2022 Hall of Fame and Hall of Merit inductees, provide a review of the AHA during the previous fiscal year and conduct the election of three new board members. The event will be live-streamed on the AHA Facebook page. Following the conclusion of the annual meeting, national show award winners will be recognized at 1:30 in Wagstaff Arena at the American Royal Complex prior to the Ladies of the Royal sale, followed by the junior show at 4 p.m.