Birk and Stith Inducted into Hereford Hall of Merit

Don grew up in southeast Missouri on a diversified farming operation. Don’s family grew crops and Hereford cattle, and they exhibited at local livestock shows. Don graduated from high school in 1965 and attended Southeast Missouri State University for three years, before transferring to Missouri State University (Mizzou) in 1968. It was at Mizzou that Don joined the livestock judging team and met Glenn Richardson. Don developed a close relationship with Glenn and graduated from Mizzou in 1970. 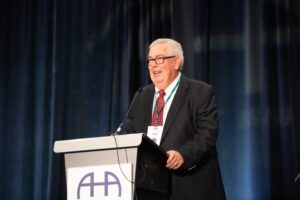 In 1971, Don got a life-changing call from Glenn to return to Mizzou as a graduate assistant coaching the livestock judging team. When Glenn switched jobs about a month into Don’s tenure — Don took over Glenn’s students and coached the Mizzou livestock judging team to a national championship in 1971. Upon finishing his time at Mizzou, Don joined the Drovers Journal in 1972 as a fieldman and worked with the publication for six years. While working for the Drovers Journal, Don gathered experience selling advertising and working livestock sales. In April of 1973, Don and his wife, Linda, were married.

Don then joined Eddie Sims with National Cattle Services Inc. to provide ring service, marketing and photography. Don developed his photography skills at National Cattle Services, and he stayed with the company until 1982, when he started his own business, Birk Enterprises. As catalogs have gone from printing in black and white to color and live auctions have transitioned to online sales, Don has been there through it all.

A pioneer in the livestock photography industry, Don worked with Hereford breeders exclusively until the late ‘90s, when he began working with cattle of all breeds. Don has spent many years working with breeders from across the U.S, providing ring service and picturing cattle. Some of Don’s first clients were Glenkirk Farms, Maysville, Mo., ACE Polled Herefords, Poughkeepsie, N.Y., Mohican Farms, Glenmont, Ohio, and Beartooth Ranch, Columbus, Mont.

Since getting that call from Glenn to return to Mizzou, Don’s career has spanned 51 years. While Don enjoys the cattle, he is especially passionate about the breeders, ranchers and business owners he’s been able to meet.

Dale took an interest in cattle at a very early age under the tutelage of his father, Ralph, who was an accomplished herdsman that managed the 250 polled Hereford cows on their farm in Stith Valley. Dale attended cattle shows and sales with his father beginning at the age of six. His early interest in the cattle business sparked a lifelong, passionate career in the Hereford breed.

Dale would work long hours on the family farm, and then groom a show string of cattle. He would load his string into a gooseneck trailer and show across the state of Kentucky. He showed at as many as 14 county fairs a summer, including the Kentucky State Fair, where he won many awards. Dale and his father had a keen eye for evaluating and selecting top genetics in the Hereford breed. 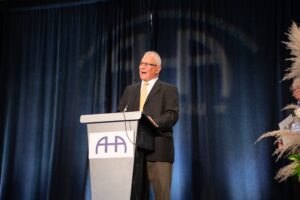 Dale is the oldest of three children. He graduated from Meade County High School in 1970, where he was president of the Meade County FFA chapter. He was later elected Kentucky State FFA President. Dale attended the University of Kentucky, where he was president of Alpha Gamma Rho fraternity, active in the Block and Bridle Club and a member of the Omicron Delta Kappa senior honorary. He graduated with bachelor’s degrees in animal science and agricultural education in 1974.

Upon graduation, Dale returned to the farm where he continued building the family’s purebred Hereford herd. However, he was eager to expand his horizons beyond his family’s herd.

Dale is a master marketeer and has been a passionate promoter of the Hereford breed for most of his life. Dale’s original post-graduation plan was to teach high school agriculture classes. However,  when one of Dale’s mentors, A.W. “Ham” Hamilton, was preparing to retire, he encouraged Dale to attend auctioneer school. The class was two weeks long and Dale graduated in January of 1975. He auctioneered for the first time at the Kentucky Hereford Association’s annual meeting, selling directory advertisements. In the years following, Dale spent his time selecting cattle, auctioning cattle, photographing cattle, and assisting breeders. His loyalty to the Hereford breed, cattle marketing skills and cow sense would propel him to become one of the preeminent auctioneers in North America.

Dale has three children and seven grandchildren. He currently resides on a 50-acre farm in Mays Lick, Ky., with his partner, lover and friend, Elizabeth. Dale is involved in his community and was a magistrate on Meade County’s fiscal court. He also served many years as the Meade County Fair Board manager.

Dale has worked with Hereford breeders big and small from coast to coast and all across Canada. He is a mentor and friend to many and has an unmatched passion for Hereford cattle.