LOUISVILLE, Ky. – Four National Junior Hereford Association (NJHA) members were elected to the NJHA board of directors at the 2022 VitaFerm® Junior National Hereford Expo (JNHE), Banners in the Bluegrass, July 16-22, in Louisville, Ky. 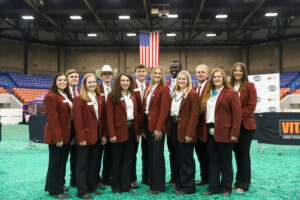 Logan McFatridge, Otterbein, Ind.; Kaylee McInvale, Cumby, Texas; Haley Mouser, Tenstrike, Minn.; and Isaac Rhode, Stewartsville, Mo., were all welcomed into their maroon jackets as new NJHA directors during the JNHE awards ceremony on July 21. Two delegates from each state junior Hereford association vote for the individuals they want to represent the membership on the NJHA board, which is composed of 12 individuals who serve three-year terms and govern the 3,800-member organization.

Learn more about the new NJHA board of directors below:

Lauren McMillan is the 20-year-old daughter of Kyle and Jodi McMillan. This fall, McMillan will be a senior at the University of Illinois Urbana-Champaign where she is majoring in agricultural leadership with double minors in agribusiness and media. She enjoys being heavily involved in all parts of campus, whether it’s the agricultural college or leading the sports student section. As McMillan looks to the future after graduate school, she plans to put her focus into a leadership position for an agricultural-based company in the communication and advertising field. McMillan is a 13-year member of the Illinois Junior Hereford Association, where she is currently serving on the executive board. On the NJHA board, she works to connect with both young and old members from the region she represents to understand how she can help better their experiences in the association. She continues to focus on what the board can improve on in order to create the best environment for the members as she believes those before her have done.

Libby Rushton is the 20-year-old daughter of Lee and Andrea Rushton. Rushton is a junior at the University of Tennessee at Martin majoring in agricultural business and political science. She plans to represent an agricultural-based company or organization in the public relations or political field. Rushton is a member of the Tennessee Junior Hereford Association where she has served as the president for two terms, the reporter and the middle Tennessee director. Her goal is to help connect her state to the national program by growing excitement and interest in show cattle and competitions. She wants to connect with the juniors in the breed by serving as a representative and enjoys having the opportunity to motivate and encourage others.

J.W. Cox is the 20-year-old son of Shane and John Moran. Cox will be a senior this fall at Western Kentucky University majoring in animal science with an option in pre-veterinary science. He is currently the block and bridle club president and serves as an agriculture ambassador at Western Kentucky University. He is also a director of the Kentucky Junior Cattlemen’s Association Board. After receiving his college degree, Cox plans to become a large animal veterinarian specializing in embryology. He is a five-year member of the Kentucky Junior Hereford Association where he served as the president and vice president. He plans to take the things he has learned within other organizations as well as the NJHA and put them to use to help younger kids get involved within the organization, while working side-by-side with industry leaders to gain support for NJHA programs.

Ralston Ripp, is the 22-year-old daughter of Cody and Ronette Heinrich. Ripp graduated in May from the University of Nebraska-Lincoln (UNL) with degrees in animal science and agribusiness. She was actively engaged in the Engler Entrepreneurship Program and is excited to continue to grow her small business ventures. She was also a competitive member of the 2021 UNL livestock judging team, a block and bridle committee chairmen and an Alpha Phi sorority member. Ripp plans to continue to grow her cattle herd and open her own business targeting beef cattle, rural communities and youth. Ripp is a 13-year member of the Nebraska Junior Hereford Association where she has taken numerous leadership roles, including serving as the 2018 state queen, reporter, secretary, vice president and president. As a NJHA director, Ripp works to ensure aspirations of the impossible are welcomed, long-lasting traditions of the Hereford breed are sustained and the legacy of juniors, breeders and beef enthusiasts will last beyond her generation.

Wesley (Wes) Denton is the 20-year-old son of John and Angie Denton. Denton will be a junior at Kansas State University (K-State) majoring in animal sciences and industry with an option in animal products. At K-State, Denton is involved in the Alpha Gamma Rho fraternity, block and bridle club, collegiate cattlemen’s club, and the Kansas State Purebred Beef Unit. Through Alpha Gamma Rho, he helped found the Alpha Gamma Royal Preview show, serving as chairman for two years, and serving as beef chairman for the K-State Little American Royal. After college, he hopes to be a cattle buyer, while continuing to grow his herd of Hereford cattle. He is a 13-year member of the Kansas Junior Hereford Association and has served on the board for four years. Since Denton’s first Junior National Hereford Expo 13 years ago, he has admired the NJHA Board and looked to them as influential leaders and role models.

Hannah Pearson is the 21-year-old daughter of Wade and Michelle Pearson. Pearson will be a senior at Texas Tech University (TTU) and is studying agricultural communications with a minor in animal science. She is currently on the 2022 TTU livestock judging team and was a member of the 2021 TTU meat judging team. At TTU, Pearson is involved in Agricultural Communicators of Tomorrow and Tech Cattle Women. She has been an active member of the Nebraska Junior Hereford Association leadership board for 15 years and has served on the Nebraska Junior Hereford board in numerous positions and was the 2019 Nebraska State Hereford Queen. Pearson’s excitement for the beef industry has grown through the Nebraska Junior Hereford Association and the NJHA, and she enjoys sharing her enthusiasm with the junior members.

Lauren Jones is the 19-year-old daughter of B.J. and Kim Jones. Jones will be a sophomore at Oklahoma State University double majoring in animal science and agricultural communications. Her future career goals include serving the agricultural industry in whatever direction her future takes her. Jones has been an active member of the Wisconsin Junior Hereford Association (WJHA) for 11 years, where she has filled numerous leadership roles including director, membership secretary, treasurer, vice president and president as well as serving as a WJHA princess for two years. She enjoys being a positive example to Wisconsin juniors and has known for a long time that she wanted to take her passion for leadership to the next level by serving on the NJHA Board.

Tar Tut is the 20-year-old son of Pock and Nyamark Tut. Tut will be a senior at Texas A&M University majoring in agriculture communications & journalism with an emphasis in sales and marketing. Prior to attending Texas A&M, he was at Butler Community College where he graduated with an associate’s degree in animal science and was a part of the highly competitive livestock judging team, who was named the 2020-2021 junior college team of the year. Currently, he is a member of the 2022 Texas A&M livestock judging team, Saddle and Sirloin Club and is an assistant coach for the Coryell County 4-H livestock judging team. As a six-year member of the Minnesota Junior Hereford Association, he strives to be someone the youth of his state can look up to as they become leaders for the next generation. Tut strives to be a leader of integrity so that the values and traditions of the Hereford breed can be instilled into the hard-working juniors of the breed.

Logan McFatridge Otterbein, Ind., is the 19-year-old son of Robert and Kristie McFatridge. McFatridge will be a sophomore at Purdue University majoring in agribusiness with a future career involving sales and marketing, while also taking over his family’s cattle operation post-graduation. He is highly involved in the Indiana Junior Hereford Association, having served as the media relations officer as well as president. He has held positions in FFA, 4-H, National Honors Society and recently served as the director of recruitment for Purdue’s FarmHouse fraternity. His goal in serving on the NJHA board of directors is to ensure that every member of the NJHA feels welcome and at home during shows, conferences and events.

Kaylee McInvale, Cumby, Texas, is the 20-year-old daughter of Hoyt and Crystal McInvale. McInvale is entering her junior year at Tarleton State University, majoring in animal science and agriculture economics. She plans on pursuing her master’s degree at Kansas State University for a degree in feed science, with the goal of being an animal nutritionist. McInvale has been highly involved in the Hereford breed, serving as the secretary and treasurer for the Texas Polled Hereford Association and as a Texas Junior Hereford Director and Texas Polled Junior Hereford Director. Most recently, she served as the 2021 National Hereford Queen, traveling the country representing the Hereford breed. She says her current phrase to live by is “inspiring the dreams to lead the future,” and looks at this as a way to continue pushing herself to turn dreams into a reality. Her goal as a director is to serve the members of the NJHA and continue to bring forward progressive and forward-thinking ideas.

Haley Mouser, Tenstrike, Minn., is the 18-year-old daughter of Gib and Michelle Mouser. Mouser is entering her first year of college and will attend Butler Community College studying agribusiness. She wants to pursue a bachelor’s degree in animal science with a minor in human nutrition and continue on to receive her master’s degree in ruminant nutrition. Mouser has been active in the different contests and programs offered through the NJHA, being selected as the 2021 NJHA Fed Steer Shootout Senior Contestant of the Year, participating in JNHE contests and attending Faces of Leadership and the inaugural BOLD conference. She has a passion for impacting those around her and being a selfless leader who keeps the success of her fellow NJHA members in her mind. She has held the dream of wearing the maroon jacket since her first JNHE in 2016.

Isaac Rhode, Stewartsville, Mo., is the 19-year-old son of Jeff and Susan Rhode. Entering his sophomore year at the University of Missouri majoring in agriculture, he plans to continue his future in the cattle industry and raise Hereford cattle. As a 12-year member of the Missouri Junior Hereford Association, he has served previously as secretary, vice president and president as well as a nominated delegate for the NJHA annual meeting and conference attendee of Faces of Leadership and BOLD. Being involved in the NJHA has made an impact on his life and long-term career decisions, prompting his desire to work in the production side of the beef industry. He is dedicated to making each interaction with NJHA members unique and wants to assist members in finding their path within the NJHA and beyond.