LOUISVILLE, Ky. — Outstanding Hereford youth were recognized for their achievements during the 2022 VitaFerm®Junior National Hereford Expo (JNHE) in Louisville, Ky., on July 21. The National Junior Hereford Association (NJHA) and National Hereford Women work together to offer educational programs and contests for Hereford youth each year. The prospect and golden bull award program recognizes junior members for their involvement in the Hereford and agriculture industry as well as their communities. Prospect awards are given to the top students in third through eighth grades and the junior golden bull awards recognize the highest achieving students in ninth through 12th grades.

Prospect winners are given a leather halter and the junior golden bull winners receive a bronze Hereford bull statue. “The NJHA is very proud of these young members who at an early age have already accomplished so much when it comes to their involvement with the Hereford breed, and giving back to agriculture and their communities,” says Amy Cowan, American Hereford Association director of youth activities and foundation. “These award programs get the younger members started on their resumes and put them in a great position when it comes time to apply for scholarships later on in their junior careers.” The following are the 2022 award winners. 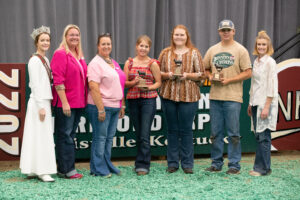 Sarah Birdsall, Torrington, Wyo., is finishing her freshman year where she is dual enrolled at Torrington High School and Eastern Wyoming Community College. She is interested in the fields of business and accounting. Birdsall credits the different public speaking programs provided by the JNHE for benefitting her the most in her life and future. The opportunities have taught her how to focus on research topics and verbally express her views to others.

Baylee Smith, Checotah, Okla., plans to attend Connors State College in Warner, Okla., upon graduation from high school, and wants to become a registered nurse, as well as attain her bachelor’s degree in animal science and health administration. Through Hereford breed programs and 4-H and FFA, she has learned analytical decision making, communication, delegation, teamwork and creative problem solving.

Sam Birdsall, Torrington, Wyo., is dual enrolled at Torrington High School and Eastern Wyoming Community College, and will be entering his senior year of high school this fall. He is interested in focusing his undergraduate studies on business or agriculture business. Birdsall says the activities provided by the Hereford breed have helped build his confidence and self-assuredness in his own abilities.

Sheridan Chaney, Keyman, Md., recently graduated high school and will be pursuing a degree in agricultural communications where she will work towards a career in agricultural advocacy and telling agriculture’s story. She now mentors her friends and shares her experiences provided by the Hereford breed, while also encouraging them to take advantage of these different programs. 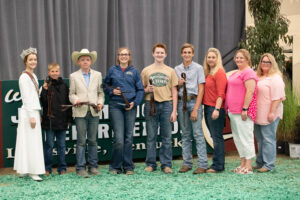 Maggie Reed, Green Ridge, Mo., has been a member of the NJHA for five years. She started with a Hereford bottle calf when she was young and then continued to love and raise Herefords growing up. She wants to run for her state junior board as well as state queen in the near future.

Brady Jones, Darlington, Wis., has been a member of the NJHA for six years, starting with his first show heifer, Apache, a bottle calf he was able to raise and take to the JNHE when it was hosted in Madison, Wis. He has also competed in the NJHA Fed Steer Shootout Program for three years, and received the recognition of grand champion purebred individual steer in 2020.

Joseph Schohr, Oroville, Calif., has been a NJHA member for eight years and currently serves as the California-Nevada Junior Hereford Association Secretary. He has always looked up to the support provided by the NJHA Board of Directors, and hopes he will be able to receive a maroon jacket in the future, helping support other junior members.

Bryce Brancel, Endeavor, Wis., is ten years old and has been a member of the NJHA for four years. He was born into the Hereford breed where working and showing Hereford cattle is a family affair. He has a goal of being able to sell semen on his bull in the future, and see calves be raised from his own cattle herd.

Jarrett Worrell, Mason, Texas, is eleven years old and finishing fifth grade. He was elected to a three year term on the Texas Junior Polled Hereford Association board of directors in 2021. His ultimate goal is to win grand champion bred and owned pair at the JNHE, recognizing his own herd’s success.