LOUISVILLE, Ky. — Four outstanding Hereford youth were awarded the Golden Bull Achievement awards during the 2022 VitaFerm®Junior National Hereford Expo (JNHE) in Louisville, Ky., at the Banners in the Bluegrass Scholarship and Award Ceremony on July 21. The Hereford Youth Foundation of America (HYFA) and the National Hereford Women awarded $33,000 at this year’s JNHE, and will award more than $200,000 in 2022 to deserving junior members to aid in their academic endeavors. 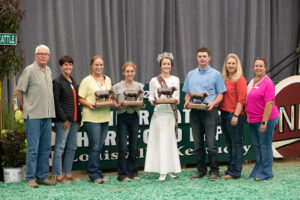 The Golden Bull Achievement Awards are given to four collegiate students each summer. This is one of the most coveted honors at the JNHE as these youth not only receive a bronze bull, but they also receive a $2,000 scholarship to assist with the education.

The following are the 2022 Golden Bull Achievement Award winners.

Bryden Barber, Channing, Texas, is completing his sophomore year at Oklahoma State University, pursuing a degree in animal science, with the intention of continuing his education at Texas A&M for a master’s in genetics or reproduction. His passion for the Hereford breed is shown in his continued involvement in the different programs offered at the JNHE, as well as the different leadership programs like the Faces of Leadership and BOLD conferences. He has decided that the Hereford breed will be the focus of his future and deserves the honor of being a Golden Bull recipient.

Molly Biggs, Dixon, Ill., will be a junior at Kansas State University, majoring in agricultural communication and journalism with dual minors in animal science and mass communication. She is focused on a career in the agriculture industry, being an advocate for the industry, increasing the transparency between producers and consumers and bridging the gap from farm to fork. Biggs intends to give back to the industry that continues to give her so much by serving on an agriculture council or as a future advisor.

KayAnn Eck, Putnam, Okla., will be transferring to Oklahoma State University this fall from Northern Oklahoma College – Tonkawa. She will be majoring in psychology with an emphasis in mental health, to focus on using her talents to address mental health in rural communities and those in the agricultural industry. Eck says, “to be able to offer services through counseling or providing a link to state resources with those who desperately need it would be a great reward and a way for me to give back to the agricultural industry that has provided so much to me.”

Lauren Gatz, Fairview, Kan., will be a sophomore at Kansas State University in the fall majoring in agricultural communications and journalism with a minor in leadership studies. She is currently serving as the National Hereford Queen and a part of the Kansas Hereford Board of Directors, and after completing her studies, she hopes to begin a career that allows her to utilize her communication skills and passion to advocate for agriculture. Gatz says her involvement in the Hereford breed and NJHA activities has greatly influenced her as an individual and helped her develop her passion for agriculture.