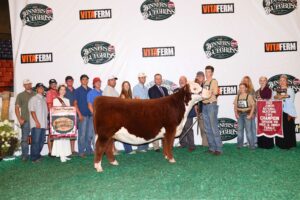 The Collins sisters won reserve grand champion and champion of division IV with a May 3, 2021, daughter of H Deberard 7454 ET.

The 2022 VitaFerm®Junior National Hereford Expo was sponsored in part by BioZyme Inc., St. Joseph, Mo. The National Junior Hereford Association (NJHA) is one of the most active junior programs in the country with approximately 3,800 members. The NJHA’s mission is to create and promote enthusiasm for the breed while providing opportunities through leadership, education and teamwork. For more information about the NJHA, visit JrHereford.org.