LOUISVILLE, Ky. — Outstanding Hereford youth were awarded numerous scholarships during the 2022 VitaFerm®Junior National Hereford Expo (JNHE) Banners in the Bluegrass Awards Ceremony, in Louisville, Ky., on July 22. The Hereford Youth Foundation of America (HYFA) awarded $33,000 alone at this year’s JNHE, and will award more than $200,000 in 2022 to deserving junior members to aid in their academic endeavors. 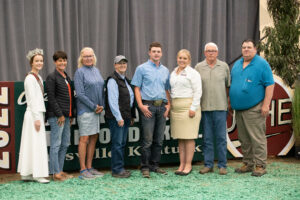 Sullivan Supply, Hereford herdsman from around the country and HYFA work together to support two $2,500 herdsman scholarships. These particular scholarships are given to college students who not only excel in the classroom and showring, but have a passion for and dedication to raising and showing Hereford cattle.

Barber begins his junior year at Oklahoma State University (OSU) in the fall pursuing a bachelor’s of science in animal science. He has served as a Dallam County 4-H club officer and Texas Junior Hereford Association junior and senior director and treasurer. After completing his undergraduate studies at OSU, Barber plans to continue his education by pursuing a master’s degree from Texas A&M University and later returning home to begin his own cow-calf operation. Barber says, “the Hereford breed is just beginning to shape my life, but I know that it will be the focus of my future.”

Morrell recently graduated cum laude from Colorado State University (CSU) with a dual degree in agricultural education and political science. During her undergraduate academic career, she served as the CSU College of Agriculture Sciences Ambassador and Associate Senator, CSU Collegiate Livestock Association Secretary and NJHA Board of Directors Communications Chairman. Morrell takes the next step toward pursuing her career goals of becoming an attorney by beginning at the University of the Pacific, McGeorge School of Law in the fall. She is grateful for the experiences and opportunities the Hereford breed has presented to her and says she would not be the person she is today if she had not been raised in the Hereford breed.