Anxiety 4th 9904 — commonly deemed “The Father of American Herefords” — was lauded in April with a new historical marker on land the bull once roamed in Independence, MO., near the American Hereford Association (AHA) headquarters. 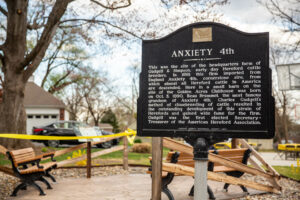 Anxiety 4th came from England to the United States in 1881, imported by Charles Gudgell and Thomas Alexander “Governor” Simpson. Many current Hereford pedigrees trace back to this legendary sire who propelled the breed’s popularity and beef industry opportunity.

In fact, history suggests Anxiety 4th’s unique characteristics — he was noted for hindquarter muscle thickness — and his use in carefully crafted line breeding programs transformed the U.S. beef industry.

“In a real sense, the work that Anxiety 4th did is as much responsible for there being a (beef) industry and made possible a way for there to be a professional cattleman. It is a story totally without equal in history,” says J.H Lents, in his book, “The Basis of Linebreeding.”

A housing development occupies the land Anxiety 4th once prowled. An old historical marker sparked recent interest by community leaders to investigate the significance of Anxiety 4th and the Hereford breed. Ultimately, residents raised funds to establish the Anxiety 4th Park at Golden Acres to commemorate the impact of the legendary sire and ensure future generations know the rich history associated with the community’s ties to the Hereford breed. AHA was a proud sponsor of the project. 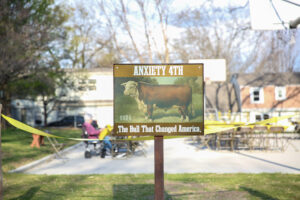 “Anxiety 4th was instrumental to the success of the Hereford breed and it proves the rich history of the year 1881,” Wards says. “The Park at Golden Acres will be an attraction spot for Hereford enthusiasts around the globe.”