“This industry has done a remarkable job of producing more beef with fewer cows, but we’re going to continue to be asked to do more with less,” according to Jack Ward, executive Vice President of the American Hereford Association (AHA). He was speaking to approximately 700 participants from 10 states at the Hemphill County Beef Conference (HCBC) in Canadian, Texas April 26-27.

“Capturing heterosis is a proven opportunity to increase efficiency,” Ward said. “Crossbreeding works and crossbreeding really works on lowly heritable traits like fertility and longevity. That’s where you get the biggest bang for the buck.” He added heterosis is even more powerful amid declining feed resources.

Ward shared a synopsis of AHA research projects aimed at documenting the production and economic advantages of both direct and maternal heterosis. Past and ongoing research partners include, Simplot Ranches in Idaho, Harris Ranch in California, Olsen Ranch in Nebraska, Amana Farms in Iowa and Circle A Ranch in Missouri.

“In every case, we see it work,” Ward said. “When we compare Hereford F1 females to their straightbred peers the result is more pounds at weaning, increased cow fertility and longevity and improved feed efficiency. Along with docility, Hereford provides added opportunity in these areas when they’re used as a complimentary crossbreeding component.”

“Research conducted by Dr. David Lalman and his team at OSU indicates the F1 Hereford cow consumes 2 pounds less feed per day than straight-bred Angus cows in the project, while maintaining a higher body condition score,” Ward explained. “They’re efficient. They stay in good shape. They wean heavier calves, and the kicker is, like we’ve seen in every other research project, the Hereford F1 female has a higher pregnancy rate.” 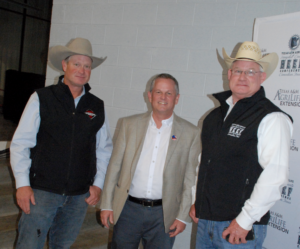 Cattle and beef have an extraordinarily positive story to tell when it comes to the carbon footprint, as well as the net environmental and human nutritional value of up-cycling forage into vitamin-dense protein.

“It’s my belief, shared by various research, that more efficient cattle make for a smaller carbon footprint than less efficient ones,” Ward explained. “The American Hereford Association is doubling down on our research, including a new project with Colorado State University (CSU) that will examine the role of beef cattle genetics in sustainability.”

Specifically, the AHA-CSU project aims to develop genetic selection tools which can identify and inform breeders of genetics that help reduce beef’s carbon and environmental footprint without sacrificing quality, performance, and efficiency.