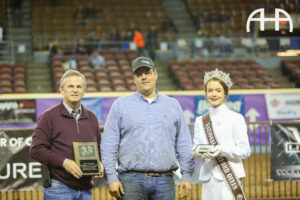 KANSAS CITY, Mo. — Jacob Wolfrey, Jarrettsville, Md., was honored as the 2022 Hereford Herdsman of the Year at the National Hereford Show during the second annual Cattlemen’s Congress hosted in Oklahoma City. After votes were cast by fellow Hereford herdsmen and breeders, the award was announced between the selection of the grand champion horned and polled Hereford females on Jan. 8 in Jim Norick Arena.

His love for cattle started at a young age as he grew up raising and showing Angus cattle. He went on to assist many large operations at national shows across North America before joining Grimmel Girls in 2010.

The Grimmel operation utilizes extensive AI, embryo transfer (ET), and IVF programs in both their Maryland and Kansas locations, where they focus on cattle that perform in the showring and in production. They have sold cattle and genetics to customers in more than 25 states and several Canadian provinces, with their sale being one of the highest averaging Hereford online heifer sales in the country.

Jacob enjoys working one-on-one with customers by sharing his knowledge and talents to provide them with a superior experience. His dedication and passion for the Hereford breed is what sets him apart.

“He has a wealth of knowledge when it comes to breeding and raising cattle, and pays close attention to detail to feed, manage, clip and fit, and get the most out of each animal,” says Melissa Grimmel Schaake. “With immense talent, he’s extremely humble and continuously looks for ways to learn, improve and enhance his skills. It’s been an absolute joy working side by side with him to grow and expand our herd, and I’m excited for the future ahead.”