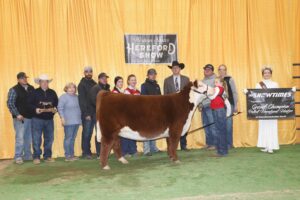 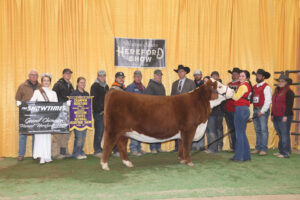 WSF Marvelous Lady G279, shown by Jaylin, Zeke and Zade Ward, Blackfoot, Idaho, was the grand champion polled cow-calf pair. The cow is a May 15, 2019, daughter of TH 13Y 358C Bottom Line 206E. She showed with a May heifer calf by Mohican 4013 14G at her side. BF 322 Scarlett 7010 ET shown by Cody Morrell, Pleasant Hill, Ore., was the reserve champion polled cow-calf pair. She is an April 19, 2017, daughter of CRR Catapult 322, and showed with a September heifer calf by MCC Kayte’s Legend 100G ET at her side. SHR Spring Fling 4F exhibited by Santos Hereford Ranch, Hilmar, Calif., was the grand champion horned cow-calf pair. The cow is an April 28, 2018, daughter of CRR About Time 743, and showed with a May heifer calf by H/TSR/CHEZ/Full Throttle ET at her side. 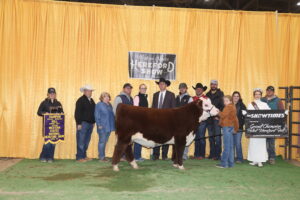 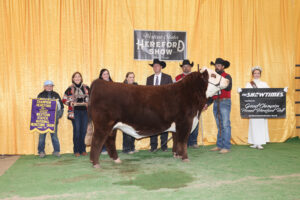 Sale. Bailey Morrell, Willows, Calif., was awarded the John Ascuaga Hereford Scholarship and Tymber Billman, of Blackfoot, Idaho, received the Willard Wolf Award in honor of the late Willard Wolf. The 2021 Western State Hereford Show Honoree was David Park, Minden, Nev. Park alongside his father, Bruce, and family operate Park Livestock Co., a family owned and operated cattle ranch that has been in business since the late 1800’s. The 2021 Western State Hereford Supporter Award Recipient was George Sprague Eugene, Ore., an avid supporter of Hereford youth. He and his wife, Karen, own and operate the Bar One Ranch.