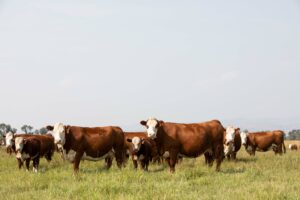 A shared sense of optimism echoed in the halls at the American Hereford Association (AHA) annual meeting this fall in Kansas City: It’s an exciting time to be in the Hereford business. In 2021, the breed experienced notable growth and increased use of Hereford genetics in the commercial cattle industry.

AHA reports U.S. Hereford semen sales increased by 9% in fiscal year 2021, with growth in domestic and international sales. Genetic trend lines also continued their march forward, with a reported 43% increase in the Baldy Maternal Index (BMI) and a 55% increase in the Brahman Influence Index (BII) during the course of the past six years.

The Annual meeting offered an opportunity to showcase the increased averages of the breed’s profit indices and continued improvement of traits important to commercial producers. Shane Bedwell, AHA chief operating officer and director of breed improvement says AHA looks to continue the momentum in genetic improvement.

“As an Association we’re going to continue to invest in research that validates maternal heterosis That is the bread and butter of any cow herd,” Bedwell says. “We really think we have an advantage in terms of fertility, the disposition advantage that Hereford brings to the table, and continued advantages in efficiency, among others.”

A hallmark of the Annual Meeting is the educational forum. This year, attendees heard from an impressive lineup of guest speakers who shared inspirational messages about grit and the abundance mind-set, the latest on promising marketing avenues, industry lobbying efforts in Washington, D.C., and herd health.

Perhaps the most value came from the hallway conversations and comradery within the Hereford family.
“The Annual Meeting is a celebration with members each and every year here in Kansas City. This is a great tie to consider the advancements made and to celebrate the victories of the year with members,” Bedwell says. “It’s a big time in our breed right now.”

Bob Harrell of Baker City, Oregon, was among attendees. Despite challenges like severe drought in portions of the U.S., and tight feed supplies, Harrell says Hereford cattle are proving their profit potential through efficiency.

“From birth to slaughter, Herefords, in my opinion, really excel in the whole production system. Not just the final product, not just from birth to weaning, not just from weaning to a nine-weight, but all along every phase they can generate income,” he says.

“There’s not a greater up-cycler than the beef cow. She’s a ruminant female that can take low-quality forage and make high-quality beef protein. She does it year-in, year-out, 365 days a year. Hereford breeders are great stewards of that,” he says. “We’re going to continue that story because it’s a great one to tell.”

Learn why more farmers and ranchers “Come Home to Hereford,” at Hereford.org.