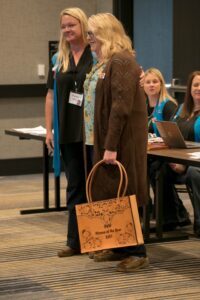 Each year the NHW recognizes and honors one woman for her achievements, leadership and dedication to and promotion of the Hereford breed.

e ensuring the juniors have every resource possible to be successful.

Throughout the years, Metch-Holan has been essential with her unwavering support toward the Texas Polled Hereford Association and Texas Poll-Ettes. If the association needed help with fundraising efforts for scholarships, Metch-Holan would often spearhead a silent auction or be the first to gift a sale heifer. In addition, she has started three different scholarships for the Texas Junior Polled Hereford members.

Metch-Holan knows an organization is only as good as its members. She recruits new members into the TPHA and Texas Poll-Ettes each year. It is customary for others to see Metch-Holan waltz through the doors of TPHA annual meetings with new faces in tow eager to be enrolled as members.

Metch-Holan’s commitment to the TPHA royalty has been steadfast in an ever evolving modern world. Because of her, the TPHA has successfully placed young girls into the royalty ambassador position as sweethearts, and they have carried through to being chosen as state queens.

“Being a ray of sunshine with great ideas wherever she goes, Barbara has been indispensable for countless committees across the nation,” Sarah Hamman, TPHA president, said. “We are all lucky to have Barbara in our lives.”