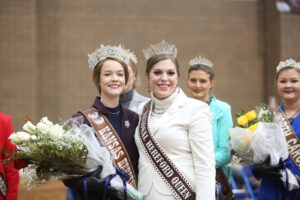 The National Hereford Queen attends events, shows and sales, along with attending the Junior National Hereford Expo presenting awards and assisting with ring presentations. This young lady  is an icon of breed queens as she is dawned in a white dress, boots, statement sash and classic crown. The National Hereford Women support this program and in conjunction with the Hereford Youth Foundation of America, the queen will receive $10,000 in scholarship to support her future education.

When discussing the first two powerful classes of fall yearling females, judge Tom Hawk said, “I’ve been judging these national shows for 25 years, and we haven’t seen this in a while, these are rockin’ good females.”