Birdwell and Meents Inducted into Hereford Hall of Merit

“Jim and John have been tremendous marketers of the Hereford breed,” Jack Ward, AHA chief executive officer, said. “They are both very deserving of their induction into the Hereford Hall of Merit.” 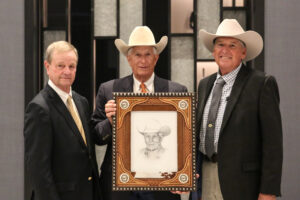 The Birdwell legacy started with a land drawing and a five-year commitment. The family made their home in Fletcher, Okla., by drawing a quarter section from a lottery for the land available for settlement. Thanks to the Homestead Act of 1862, the Birdwells just needed to live and work the land for five years before it became theirs. Jim continues to live and farm on the property originally gained by his great grandfather.

He still has the original deed, signed by President Theodore Roosevelt. Jim attended Oklahoma State University (OSU) to study agricultural education. After graduation, he headed to Union City, Okla., to teach high school agriculture courses. Jim had a quick-kindled friendship with the owner of the local service station, as well as with those who frequented the gathering place for coffee and conversation. Jim would go to the station after school, and all the farmers would be there. Not only did Jim befriend the owner of the station, but he also taught his son in school.

Little did he know, he would soon be introduced to someone new: his future wife, the station owner’s daughter Jeanne. Jim and Jeanne married, and in 1972, they made the

move from Union City to Fletcher to buy the land across from the family’s homestead.

The couple has been there since. Jim taught high school students for five years, but the Lord had other plans for his future. Ed Meacham was the head of the Western field staff of the American Polled Hereford Association (APHA). He called Jim about an opening on the field staff, which Jim accepted. Jim had to sell $20,000 worth of advertising. The drawback was you could buy a page of advertising for about $300 at that time. Jim served APHA members in Oklahoma and Kansas from 1972 to 1975 before he found his true calling.

Between Jim’s contacts in the registered cattle business and advertising efforts, he was able to auction at a variety of sales until his retirement in the fall of 2020. His many years of service to the livestock industry across the United States and Canada will not be

soon forgotten. The cattle business has always been a stronghold for the Birdwell family. Joel and Jamie, the two Birdwell children, both attended OSU, just like Jim and Jeanne,

and stayed connected to the cattle business upon graduation. The Birdwell children also maintain a close connection with the Hereford breed. With the five Birdwell grandchildren growing up around the business, the legacy of the family lives on. 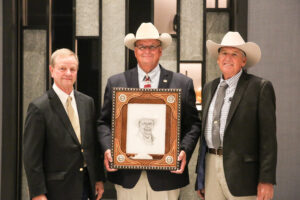 Col. Kevin Wendt, Ohio auctioneer and longtime friend, worked many auctions with John Meents over the years. Kevin learned from John to be honest and tell the truth;

have faith that things will work out, but always be honest. After turning his tassel at Purdue University, John landed his first livestock marketing job as a fieldman for the American Yorkshire Club (AYC) in 1978. The first sale he worked was the record-shattering McGraw Yorkshire production sale that sold more than 760 head for $283,195 — a record that still stands as the most breeding hogs sold in a single production sale.

Before the sale, John received the best advice a young ringman can receive from legendary swine auctioneers, Col. Mark Pickel and Col. Dan Baker — remember who bid and what they bid. Armed with these words of wisdom, John traveled 98,000 miles in his 11 months of AYC employment. Then he was tapped by another livestock legend, Neil Orth, to join the Drovers Journal fieldstaff.

At the time John joined, the publication was hoping to create a swine-specific sister publication. John dove in, driving many miles, visiting with producers about their stock for sale and learning about effective ways to use print advertisements. John cut his teeth in the industry with livestock merchandising legends such as Wade Houser, Jay

George, Jay Carlson, Lyle Eiten and Ken Torr. Although John’s role at Drovers changed to be cattle-centric rather than swine focused, his dedication to helping producers find ways to sell stock never wavered. For 12 years, John did just that until the Drovers fieldstaff dissolved in 1991. After Drovers, John worked briefly for the American Polled Hereford Association before the many nights away from his young family called him home to Ohio, where he joined a local country store called, Hochstettlers.

At Hochstettlers, he peddled pet feed, and at home, he and his wife Peg raised their children, Jay, MaeLyda and Emily. The livestock industry didn’t forget John’s marketing talents, though. Previous American Hereford Association (AHA) executive vice president Craig Huffhines called to see if he would work the ring at one sale. But, that one sale turned into another, then another, then another before John was offered a role as the AHA Upper Midwest Region field representative. On Aug. 1, 2000, he officially started with the Association.

Every state newsletter column John penned ends with the sentence, “Make your cattle better today because you have to market them tomorrow,” a sentiment John believed throughout his entire livestock marketing career. Whether a breeder registered two calves a year or 200 with the Association, John made himself available as a resource, sounding board and friend to AHA members. He worked hard to sell their animals both in the sale ring and privately, offered industry insights for advertising and breeding decisions and cheered on multiple generations of Hereford showmen and women.

Today, John’s home is in Jenera, Ohio. He and Peg live across the road from her parents, and the couple run a few crossbred cows and bale hay on their rolling, grassy acres. Looking back over his years as a field representative, often putting 50,000 to 60,000 miles on his car each year, he hopes to be remembered for one thing: fairness. No matter if you registered one animal or 200 animals, John wanted to treat everyone equally. The qualities John embodied as a member of the fieldstaff, are those worthy of his induction into the American Hereford Association Hall of Merit.