New NJHA Board Members Elected to Wear the Maroon Jacket 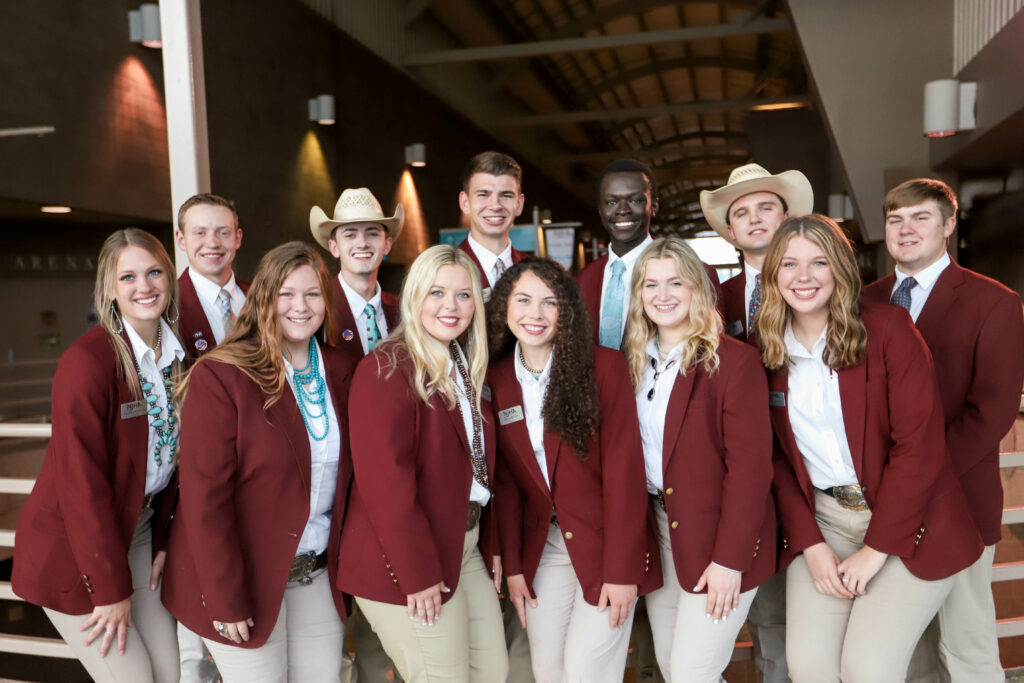 Wesley Denton, Blue Rapids, Kan.; Lauren Jones, Darlington, Wis.; Hannah Pearson, Oconto, Neb.; and Tar Tut, Faribault, Minn., were all welcomed into their maroon jackets as new NJHA directors during the JNHE awards ceremony on July 8. Two delegates from each state junior Hereford association voted for the individuals they wanted to represent the membership. The NJHA board is composed of 12 individuals who serve three-year terms and govern the 3,800-member organization.

Learn more about the new NJHA Board of Directors below.

Noah Benedict is the 21-year-old son of Chad and Becky Benedict and is a senior at the University of Illinois in Urbana-Champaign majoring in agribusiness: markets and management and minoring in leadership studies. Upon graduation he plans to work in the livestock feed and nutrition industry. Noah has held a variety of leadership roles, most recently as the chairman of the Illinois Junior Hereford Association. He is a fifth-generation Hereford breeder, and says he hopes to continue his family’s operation into the next generation. Noah values the NJHA because of its tremendous support for its junior members and how much he knows it can help them grow. He strives to make as many connections as he can with the junior members and their families and is looking forward to an exciting final year serving the NJHA as chairman.

Wyatt Lawrence is the 21-year-old son of Bryan and Marytina Lawrence, and recent graduate of University of Minnesota Twin Cities majoring in agribusiness with a minor in animal science. While at the University of Minnesota, Wyatt was a part of the Livestock Judging team, Block and Bridle club and a member of the Alpha Gamma Rho Fraternity. In 2020 Wyatt married his wife, Claire, and they returned to Princeton to take part in the family farming operation. Wyatt and Claire are the fourth generation to raise Hereford cattle. Wyatt attributes his knowledge and passion for the cattle industry to his time spent as an NJHA member. He has held many leadership roles in the breed at a state level and considers it a true honor to serve on the national board of directors. While on the board Wyatt focuses on educating and growing the next generation of beef professionals. Wyatt is passionate about the breed and Hereford youth, and is excited about what the future holds for the NJHA.

Bailey Morrell is the 20-year-old daughter of Barry and Carrie Morrell. This fall she will be a senior at Colorado State University (CSU) double-majoring in agricultural education with a concentration in agricultural literacy and political science with a concentration in environmental policy. During her years at Colorado State University, Bailey has served as the Block and Bridle club Vice-President, the Collegiate Livestock Association Secretary and a current member of the livestock judging team. After graduation she plans to attend law school to earn an agricultural law degree. Bailey hopes to own her own practice in Northern California specializing in agriculture water rights while continuing to operate her family’s generational seedstock Hereford operation, Morrell Ranches. Bailey has served as president for four years of the California-Nevada Junior Hereford Association and state Hereford queen. She looks forward to serving on the junior board for one more year while making memories that last a lifetime.

Lauren McMillan is the 19-year-old daughter of Kyle and Jodi McMillan. Lauren is a sophomore at the University of Illinois at Urbana-Champaign where she is majoring in agricultural leadership while being heavily involved in all parts of campus. Lauren may not have any specific future plans, but after graduate school she plans to put her focus into a leadership position for an agricultural based company. Lauren is a 12-year member of the Illinois Junior Hereford Association where she is currently serving as President. She works to connect with both young and old members to understand how she can help better their experience in the Association. Lauren continues to focus on what the board can improve on in order to create the best environment and JNHE for our members as she believes those before her have done. Lauren expresses how much of an honor it is to be serving on this board and she cannot wait to see what the future holds.

JW Cox is the 19-year-old son of Shane and John Moran. JW will be a junior this fall at Western Kentucky University majoring in animal science with an option in pre-vet. After receiving his college degree, JW plans to become a large animal vet specializing in embryology. JW is a four-year member of the Kentucky Junior Hereford Association where he served as the president and vice president. JW would like to return the favor the board gave him by striving to be someone that could set the pace for the younger generation. He plans to help younger kids get involved and get started in the organization, while working side-by-side with leaders of our industry to gain support for NJHA programs.

Libby Ruston is the 19-year-old daughter of Lee and Andrea Rushton. Libby is a sophomore at the University of Tennessee at Martin majoring in agricultural business and political science. Libby plans to represent an agricultural based company or organization in the public relations or political field. Libby is a member of the Tennessee Junior Hereford Association where she has served as the president for two terms, the reporter and the middle Tennessee director. Libby’s goal is to help connect her state to the national program by growing excitement and interest in showing cattle and competitions. She wants to connect with the juniors in the breed by serving as a representative and having the opportunity to motivate and encourage others, as well as connect herself more to the breed through seeking and learning more about the Hereford industry as a whole.

Luke Daniels is a 19-year-old twin son of Scanlon and Angela Daniels. He will be a sophomore at South Plains College this fall, studying pre-veterinary/animal science and competing on the livestock judging team. Luke’s ultimate goal is to raise quality Hereford cattle and farm, while focusing on the advancement of embryology and collection services in his family’s veterinary operation – Circle H Headquarters, L.L.C. He credits his competitive drive, ethics and genuine passion for the Hereford breed to being a first-generation breeder growing up in the Texas panhandle. As a 12-year member of the Texas Junior Hereford Association, Luke has held multiple leadership positions. In these positions he aims to be both a set of ears and information for the Hereford youth, attempting to be the best resource possible while assisting in growth of the breed’s future.

Ralston Ripp is the 21-year-old daughter of Cody and Ronette Heinrich. Ralston is a junior at the University of Nebraska-Lincoln with a dual major in animal science and agribusiness. While at UNL, she has been actively engaged in the Engler Entrepreneurship program and is excited to continue to grow her small business ventures. She has been a part of the livestock judging team, Block & Bridle committee chairmen and an Alpha Phi freshman orientation leader. Ralston plans to grow her cattle herd and open her own business targeting beef cattle, rural communities and youth. Ralston is a 12-year member of the Nebraska Junior Hereford Association and served as the 2018 state queen, the reporter, the secretary, the vice president and current president. As a NJHA Director, Ralston works to ensure aspirations of the impossible are welcomed, long-lasting traditions of the Hereford breed are sustained, and our legacy is grown to last beyond our generation.

Wesley Denton is the 19-year-old son of Angie and John Denton from Blue Rapids, Kan. He will be a sophomore at Kansas State University majoring in animal sciences and industry. He has been a director for the Kansas Junior Hereford Association since 2017 along with multiple FFA and 4-H offices. He plans to serve the National Junior Hereford Association (NJHA) with integrity, leadership and a hard-working hand, while continuing to strive to be a selfless leader. He believes the strength in an organization like the NJHA is the ability to grow connections across age groups. He has led clipping, fitting and showmanship clinics as well as individual mentorship, and would like to expand on this one-on-one approach to the NJHA Junior Board of Directors.

Lauren Jones is the 18-year-old daughter of BJ and Kim Jones of Darlington, Wis. She is going to be a freshman at Oklahoma State University double majoring in animal science and agriculture communications. One of her long-term goals is to help cattlemen effectively market their animals and end-products. She believes it is important for the membership to continue to be involved in activities that provide youth with experiences that will help them succeed in the future. She wants to explore ways for the adult membership to become more involved in the junior membership, especially during the transition of those graduating from junior membership and joining the adult association.

Hannah Pearson is the 20-year-old daughter of Wade and Michelle Pearson of Oconto, Neb. She is going to be a sophomore at Texas Tech University, majoring in agriculture communications. She plans to promote the contests and work with the state associations to promote participation in the contests while serving on the NJHA Board of Directors. She believes it is important for the board to be distinguished, honest and reputable advocates of both the Hereford breed and the beef industry. She looks forward to building relationships with other members and giving back to the breed and continuing to build on the “tomorrow of agriculture.” She would be honored to help grow the next generation of leaders in the beef industry if elected as a director.

Tar Tut is the 19-year-old son of Pock Tut and Nyamark Kekh and is from Faribault, Minn. He is going to be a junior at Texas A&M University majoring in agriculture communications, with an emphasis in sales and marketing and a minor in animal science. He hopes to continue and get a masters in international communications after completing his undergraduate degree. He believes it’s important to encourage all junior members to participate in as many programs as possible, to promote a well-rounded individual in the breed as well as the beef industry. He wants to be a leader for juniors in the organization and a positive light to lead them to the top.

The 2021 VitaFerm® Junior National Hereford Expo was sponsored in part by Biozyme Inc., St. Joseph, Mo. The National Junior Hereford Association (NJHA) is one of the most active junior programs in the country with approximately 3,800 members. The NJHA’s mission is to create and promote enthusiasm for the breed while providing opportunities through leadership, education and teamwork. For more information about the NJHA, visit JrHereford.org.