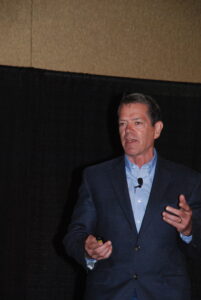 “There are no shortcuts in the genetics business,” explained Jim Pullen of Pullen Family Farms during the recent Beef Improvement Federation Research Symposium.

“Creating competitive genetic progress is not a high-tech, difficult to understand formula. It is created by disciplined data collection on a large scale, accurate ranking of animals, selecting and retaining the best and culling based on data. There are no secrets in the genetics business,” says Jim Pillen of Pillen Family Farms, Columbus, Neb. “What differentiates suppliers is the discipline of implementing the fundamentals. Championship teams master the fundamentals and execute them every play. The same is true in a genetic program and one must believe this and stay focused. It is the fundamentals that create the opportunity for applying technology when it makes sense to do so. Not implementing the fundamentals 100% of the time results in second place, at best.”

Pillen shared insights at the recent Beef Improvement Federation (BIF) Research Symposium in Des Moines. His presentation title: Lessons in Genetics from the Pork Industry. Pillen, a veterinarian, began farming with his father in 1983, a 60-sow farm. A decade later, he formed Pillen Family Farms. In 2003 Pillen purchased a swine genetics supplier, currently known as DNA Genetics. It is the second largest genetic supplier in the United States and Canada and the only family-owned, producer-owned pig genetics supplier.

Pillen’s genetics are at the forefront on the industry-wide transition toward using a Duroc sires. He estimates Duroc lines produce more than 80% of all market pigs; more than half of those stem from Pillen genetics. As recently as 2003, Duroc lines represented about 30% of pork production in the U.S. and Canada.

“Just remember, the best pig wins, keep it simple, but do what it takes, and keep looking ahead to stay in front,” Pillen says.

Most recently, Pillen Family Farms became a partner in WholeStone Farms pork processing plant in Fremont, Nebraska, which completes the final piece of vertical integration for the business.

“Producing food for the world is the noblest of professions,” Pillen says. “At a time when so much of what we believe in and do every day appears to be under attack, it is important that we persevere, educate and continue to produce food in a sustainable manner. Being involved in packing, production and genetics has been humbling, but also has given us a unique and comprehensive viewpoint to leverage and create value for the industry. At no time in our history of producing food have we produced so much abundance, with so small of input.”

Look for more details about lessons shared at BIF, in the August issue of Hereford World.