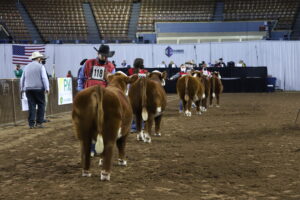 KANSAS CITY, Mo. ­­­— A decision has been made on the recognition of national shows for January 2022.

The American Hereford Association (AHA) Board of Directors met this week during their spring board meeting to make a decision about recognition levels of the Cattlemen’s Congress in Oklahoma City, Okla. and National Western Stock Show (NWSS) in Denver, Colo. The AHA Board voted to host the 2022 National Show and National Hereford Sale during the Cattlemen’s Congress in Oklahoma City.

The shows and exhibitor surveys were all taken into consideration during this decision. It was decided that Cattlemen’s Congress in Oklahoma City will host the 2022 National Show and National Hereford Sale, junior show and pen show.

Following Cattlemen’s Congress, AHA will recognize the NWSS as a Regional Point Show. The AHA will share more information and schedules with its membership and interested parties once both venues have been notified and establish final changes.