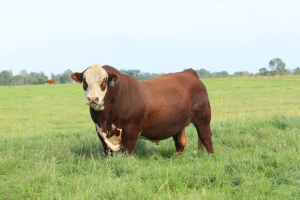 — Spring seedstock sales are well under way in many parts of the country as cattlemen and women purchase bulls meant to add value to their operations. An increasing number are choosing Hereford.

“We’ve found that a lot of our customers that have more straightbred cattle, once they use Hereford genetics in a crossbreeding rotation, not only did they see higher weaning weights at the sale yard and their calves were more in demand, but more importantly, we feel that the female end of things has improved from a fertility standpoint, and maternal traits have improved a lot when they’ve actually used Hereford genetics in a crossbreeding rotation,” says Kyle Colyer, Idaho Hereford breeder.

“One of the main reasons they come back to Hereford bulls, year in and year out, is the longevity and how long those bulls last, the structural correctness and the feet and legs, and how many years they can get out of a bull,” he adds.

“With direct heterosis, by using Hereford genetics on that British cow herd, you’re going to get about a 15- to 20-pound increase,” Bedwell says, compared to straight commercial Angus cattle. One study, in which 600 commercial Angus females were AI-bred to 10 Hereford sires, documented improved feed efficiency and average daily gain (ADG) among black baldie calves — as well as fertility increases in females.

“They kept the baldy females back, bred them and compared them over a three-year study, and that showed a 7% advantage in pregnancy rate, so we’re getting more females bred because of that heterosis advantage,” he says.

The advantages also translate to the feedyard.

“We’ve always had that great, rich tradition of Hereford cattle being docile and sound, and now we’ve coupled that together with calving ease bulls that can inject a lot of pounds into your calf crop. The conversion advantage of Hereford cattle is tremendous, and we’ve also seen the end product come with that as well as.”

“It’s important for producers to update their bull batteries to get the most current genetics that are available to them, especially the carcass genetics that the Hereford breed has been able to turn over and find most recently, especially more IMF and adding more marbling into these cattle,” he suggests. “We feel that if commercial producers were updating their bull batteries more often, that would be a good thing.”