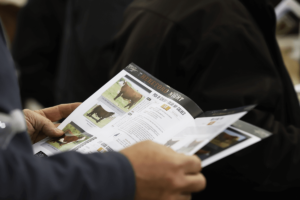 After the final bids were tallied, 36.08 lots brought $627,250 to double last year’s gross sales. The American Hereford Association thanks Sam Eck and W-W Manufacturing, Thomas, Okla., for supplying the sale ring, and the Cattlemen’s Congress crew for setting a great sale arena and their second-to-none hospitality.

“A big thank-you goes out to the consignors for bringing an elite set of Hereford cattle and genetics to the national Hereford Night sale in OKC ,” says Joe Rickabaugh, AHA director of field management and seedstock marketing. “This sale sets a pace in the Hereford breed and the credit goes to the consignors year in and year out. We greatly appreciate the buyers and all the sale attendees who continue to support this event.”

For more information about the sale, contact Joe Rickabaugh at 816-842-3757 or jrick@hereford.org.