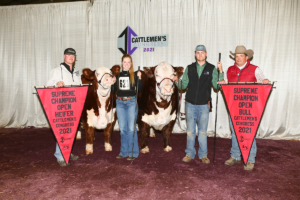 The Hereford breed left a lasting mark on the inaugural 2021 Cattlemen’s Congress by claiming top honors in the supreme champion drive. Lauren May,Mineral Point, Wis., walked away with the supreme open female title with her horned championfemale, Purple Iris 145G. This UPS Sensation 2296 ET daughter was born May 7, 2019.

“The two supreme champions culminated an awesome week at the Cattlemen’s Congress and confirms the renewed interest and definitely showcased the strength of the Hereford breed,” says Shane Bedwell, American Hereford Association director of breed improvement.

After the postponement of the 115th National Western Stock Show, breed associations did not have a location to host national shows and sales. In a matter of a few months, cattle producers quickly rallied together to plan the first-ever Cattlemen’s Congress, where exhibitors displayed 9,627 head of cattle representing 33 breeds from 44 states and Canada.

“This event is so important to the beef industry, and we are so proud to get it done here in the state of Oklahoma,” says Oklahoma Governor Kevin Stitt. “In Oklahoma, we’re always going to fight for the ag community and this way of life.”

A total of 677 Herefords were exhibited throughout the four-day Hereford show at the Cattlemen’s Congress. Judge Shane Werk, Manhattan, Kan., evaluated 274 head in the junior show on Thursday, Jan. 7, to head off the Hereford display in the Jim Norick Arena.

The Hereford Night National Hereford Sale rounded out Saturday evening, where 40 lots doubled the gross of last year’s national sale with $658,750 and averaged $16,469.