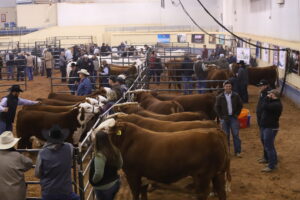 The grand champion pen-of-three females and champion junior heifer calf pen was exhibited by Buck Cattle Co., Madill, Okla. The group was sired by H The Profit 8426 ET and LCX Perfecto 11B ET and posted an average weight of 1,008 pounds with a 3.09 weight per day of age (WDA).

Champion honors for the pen-of-three bull show went to GKB Cattle, Waxahachie, Texas, with the group first winning the junior bull calf division. Sired by C Double Your Miles 6077 E, the group averaged 1,107 pounds and had a calculated WDA of 3.15.

Barber Ranch, Channing, Texas, won champion pen-of-three senior bull calves before being selected as the reserve grand champion pen with a group sired by CRR 719 Catapult 109. The pen weighed an average of 1,555 pounds with a 3.31 WDA.