Hereford Breeders Honored for 100 and 50 Years of Heritage 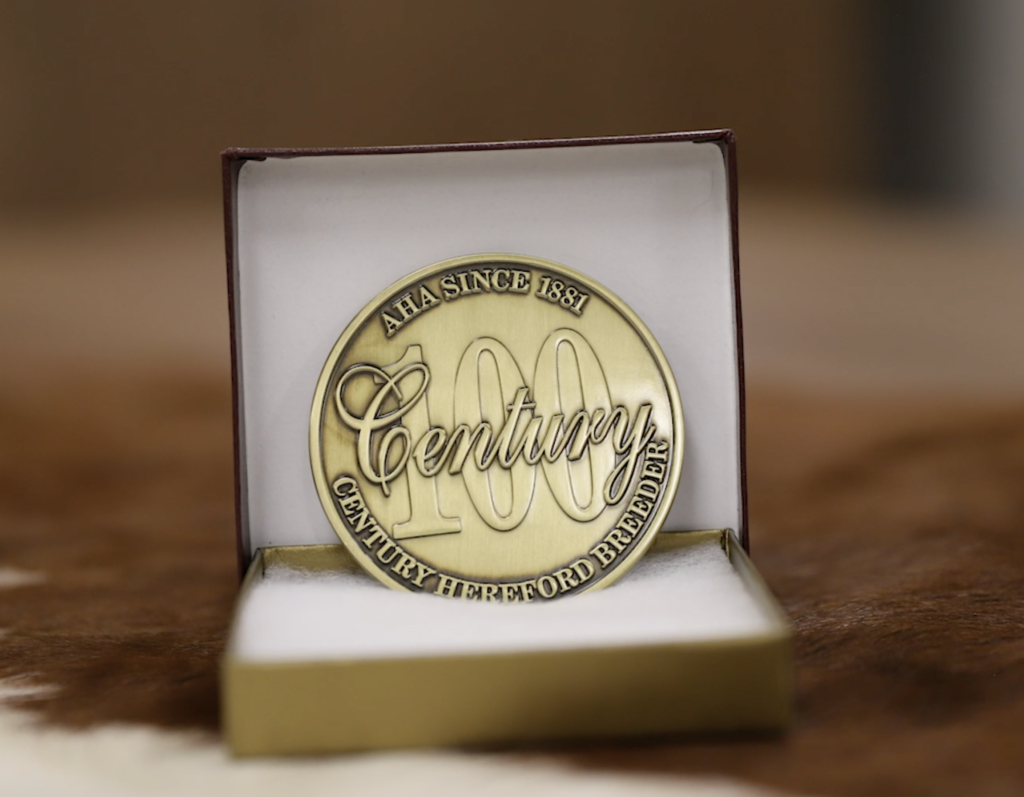 “These lifetime achievement awards represent a tremendous milestone,” says Shane Bedwell, AHA chief operating officer and director of breed improvement. “The AHA commends the dedication and longevity of these families within the Hereford breed. In a year like 2020, we are reminded of the resiliency and perseverance these breeders have endured over the years to remain in operation.”

In 1911, the bull, Disturber 4th was purchased in the Des Moines, Iowa, Disturber Sales, where many bulls and females were sold. From 1920-1930, G.A. and his sons hosted production sales at the farm in Queen City. In 1930, Sidwell moved his family to the area in Colorado that now serves as home of Sidwell Herefords.

G.A. and his son F.A. hosted their first production sale in 1940, with others to follow in 1945 and 1947. Also in 1947, Sidwell’s purchased half interest in Colorado Baldwin from Jeffers in New Mexico and eventually had full possession of the bull. Annual production sales then began in 1953, with many of those sales being referred to as the Home of Colorado Baldwin Sale.

F.A. Sidwell continued the family tradition and formed a corporation with his three sons Harold, Walter and Richard. Harold continued with the legacy upon the corporation being dissolved in 1971. Harold strived for top end Hereford cattle. He purchased Britisher 33 from Wyoming Hereford Ranch and mated him to Colorado Baldwin daughters, creating the bloodline Cadets, which were featured in the annual bull sales. The final production sale at the Sidwell Herefords Ranch was the fall of 1981. With that being the final sale year, production sales spanned 34 years at the ranch near Carr.

In 1985, Harold and his wife, Marlene, formed a new partnership with their son, Bryan. With this partnership, the name of Sidwell Herefords would now be five generations.

In September 2008, a 100-year celebration was held at the ranch near Carr. Then in September 2009, Bryan married Linda Stangle of Stangle Herefords in Nebraska. To that union, Sidwell Herefords was expanding and changing again.

In 2011, Harold was inducted into the prestigious AHA Hereford Hall of Fame.

Cottage Hill Farm was established in 1896 by Clarence and Sarah Taylor (Sonny’s grandparents), who purchased the original 190-acre tract of land resting in the beautiful Potomac Valley in Petersburg, W.Va. Clarence purchased the first registered Hereford cattle in 1920.

Cottage Hill Farm continued in the registered Hereford business through the years. Bulls and heifers were marketed through on-farm production sales starting in 1966 and continued through 1985. Currently they market our registered Hereford cattle by Private Treaty, Beef Expos in West Virginia, Kentucky and Virginia and Producer Consignment Sales in West Virginia, Kentucky, Ohio and Virginia.

The farm currently runs approximately 200 head of registered Hereford cows on 1,000 acres. Cottage Hill Farm is family owned and is operated by W.C. (Sonny) and Carole Taylor, along with their three sons and families. Cottage Hill Farm has been overseen by several generations of the Taylor family and they are as follows:
First generation – Clarence and Sarah Taylor
Second generation – Hogueland and Wayne Taylor
Third generation – W.C. and Carole Taylor
Fourth, fifth and sixth generations – Mark, Michael and William Taylor and their families.

The Taylor family strives to breed and sell the best Hereford genetics possible to not only improve their herd, but to improve your herd and the future of the Hereford breed.

Darold Bancroft’s parents bought 10 Hereford heifers in 1964 and let Darold and his brother both pick a favorite. From this pick came Miss Lassie Dom 8 that was born in 1968. This heifer went on to be named grand champion multiple times at several local fairs. Darold joined the Michigan Hereford Association (MHA) in 1982 and held multiple officer roles with the association. Darold holds dear his time as director and officer of the MHA, as it gave him the opportunity to meet many people and make many friends. Darold comments, “Although I’m a smaller breeder, I still believe in the Hereford breed and the people that make up the membership of this association.”

Lenth Herefords started with Elden and Bea Lenth along with children Doug and Barb. Over the years, the operation transitioned to Doug and wife, Marilyn, who operate Lenth Herefords today. The original 25 Registered Hereford cows and 31 heifers were purchased in the mid 60s, coming from Lemmon, S.D. The herd has evolved over the years and consists of 80 females today. The cow herd is deep with 10 active Dams of Distinction (DOD) and over 30 daughters and granddaughters of DOD’s. The Lenth family enjoy promoting high quality seedstock through their website to drive private treaty sales where they market 40 bulls and 30 females annually.

The Lenth family has been very engaged in local and state cattlemen associations and enjoy giving back. Lenth Herefords was honored to be named the “2018 Iowa Seedstock Producer of the Year.” Over the last 50 years, bloodlines and cattle body types have changed but many things have remained the same. They have adapted with the times and are still passionate about the Hereford business 50 years later.