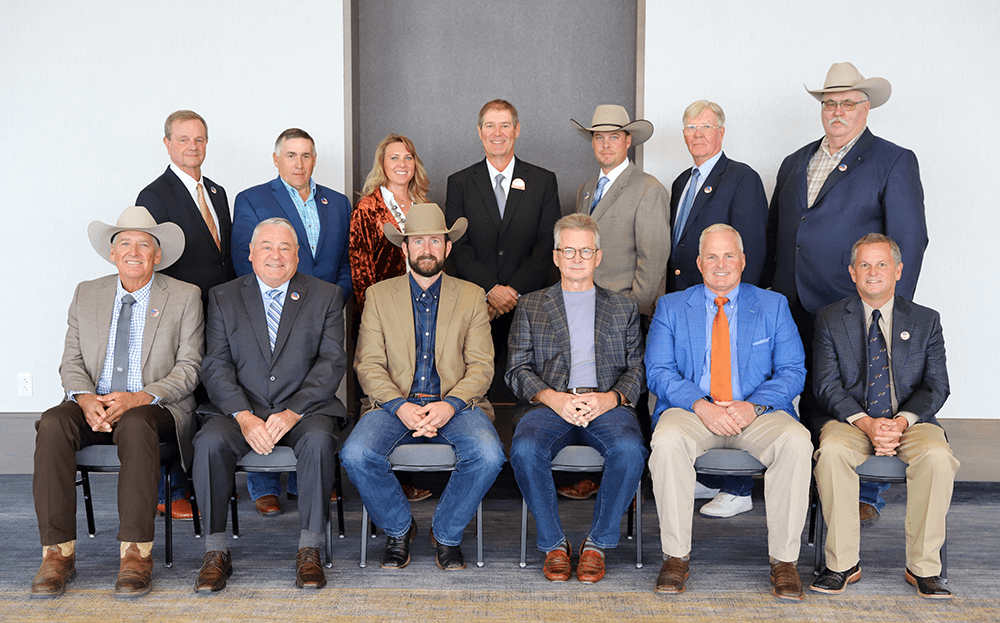 The Pedrettis have long emphasized performance data in their Hereford herd with performance records dating back to the 1950s. Even though the ranch received recognition in the showring in the ’70s and early ’80s, including cattle shown on the Hill and in the carloads at the NWSS, the Pedrettis’ goal has always been to produce cattle that work for the commercial cattlemen in California.

Pedretti Ranches raises approximately 80 bulls each year, which are marketed by private treaty sales. With two calving seasons six months apart, the ranch always has the next set of bulls on test. Both Mark and his father-in-law, Gino Pedretti, work with commercial customers. Pedretti Ranches focuses on sound cattle with balanced EPDs, good disposition and udder quality.

Mark manages the day-to-day work including addressing herd health issues, vaccination schedules, feeding, pasture management, breeding and calving. He also works in the farming operation, which involves growing cotton, corn and hay. He also has some limited duty on the family dairy.

Mark has served as a California-Nevada Hereford Association board member and has hosted numerous tours. He has been a Merced-Mariposa County Cattlemen’s Association director, a member of the Chowchilla High School FFA ag advisory committee, a 4-H leader and a volunteer fireman. Mark has also served as a deacon and elder in his local church.

Bruce Everhart operates Everhart Herefords, which is a 50-year purebred operation consisting of 25 head. The operation sells bulls, steers and heifers to commercial and junior members in the Midwest and utilizes grass and wood pastures not suitable for corn and soybean production. Its herd was built on junior heifers purchased annually from Wiese and Sons over a 15-year period. Breeding some of the best females from this iconic herd to some of the most elite bulls of the breed has produced champions at state and national shows.

The highlights of the program are raising the reserve supreme heifer at the Indiana State Fair and the reserve national champion female at the JNHE. Bruce recently retired after a 40-year career in ag banking, which included managing an ag banking team in the Midwest with Wells Fargo Bank. Bruce is also a board member and past president of the Indiana Hereford Association. He has served leadership roles in hosting three extremely successful JNHEs in Indiana, was the vice chairman and finance chair of the Hereford Youth Foundation of America and served as a board member of the Hereford Legacy Fund LLC.

He and his wife of 38 years, Shoshanna, have two children — son, Blake, and his wife, Ashley; and daughter, Jordan, and her husband, Brian — and six grandchildren.

Raised on a multigenerational operation based in eastern Oregon, Wyatt Agar is a manager and a partner in Durbin Creek Ranch, Thermopolis, Wyo., and Washakie Feeders, Worland, Wyo. The seedstock division runs 500 head of females, where artificial insemination (AI) and embryo transfer (ET) technologies are used to produce three-fourths and full siblings. At weaning half of the heifers are retained for the cow herd while the other half are marketed as bred females. Bulls are sold as 2-year-olds in a February production sale, which also includes baldy replacement females and ranch geldings. Calves that do not make the bull pen are fed and used to collect data on the sire groups.

The commercial division runs approximately 1,200 Angus and Red Angus mother cows that are exposed to Hereford bulls to produce first generation (F1) calves. The program collects data from birth to harvest on sires used in the seedstock division. At weaning females are sold in the February production sale. Light steers go to the operation’s stocker program in Oregon, and heavy steers are backgrounded at Washakie Feeders along with 5,000 to 6,000 of the ranch’s bull customers’ calves. These steers are fed to 900 pounds and are finished in Colorado.

Wyatt and his brother grew up on the family’s cow-calf and stocker operation in Oregon, which they later expanded to include the Wyoming divisions. Wyatt and his wife, Joey, strive to raise their children, Rylee, Taylor and Cooper, in the same manner — working side-by-side with family to produce high-quality beef cattle off the land and backed by the cowboy ethic.

As a junior, Wyatt was the vice president of the Oregon Junior Hereford Association. Now, he is a senator in Wyoming’s Senate District 20 and is the first freshman senator in the state’s history to serve on the Appropriation Committee and the Select Capital Finance Committee. Prior to, he served a term as the vice chairman and a term as secretary of the Hot Springs County Republican Party. Wyatt is a former vice chairman of the Transportation Committee, a board member of the Hot Springs County Weed and Pest and a deacon at the First Baptist Church of Thermopolis.

In Winner, S.D., Jerome Ollerich operates Ollerich Bros. Herefords along with his brother, James. With their father’s help, the brothers got their start in the Hereford business with a 4-H project, sparking a lifelong passion for the breed. More than 50 years later, the Olleriches have grown their project into an operation consisting of approximately 100 Hereford cows and 30 bulls, which are marketed through annual private treaty sales. Ollerich cattle have been sold to producers in 13 states and three foreign countries.

With an extensive background in the cattle industry, Jerome is knowledgeable on many aspects of the business. Before relocating to Winner, he grew up on a diversified farm in Sioux Falls, S.D., which included corn, soybeans, oats and a commercial cow herd. Additionally, his father owned a livestock auction barn and co-owned a grain elevator and a 10,000-head commercial feedlot. Jerome’s brother is involved in the trucking business and primarily hauls cattle.

Jerome is very active with the South Dakota Hereford Association (SDHA). A past president, he has served two terms on its board of directors. In 2019 the SDHA recognized Ollerich Bros. Herefords with the Seedstock Producer of the Year award, the same year in which the brothers received the Golden Breeder award from the AHA. They have also hosted the South Dakota Junior Hereford Association Field Day back-to-back years and look forward to hosting the event in the future.

In his community, Jerome served two terms on the township board and has served on the local church board. He was also a director of the South Dakota Rodeo Association for seven years.

After high school, Bob served in the Navy from 1968-72. Leveraging the skills he learned from his naval training, Bob spent 38 years in the computer-services industry, retiring in 2012 as a director for corporate program management. Although he had little exposure to agriculture growing up, Bob learned about his family’s agricultural roots from his grandfather, who had moved to Washington, D.C., during the Great Depression. Inspired by his grandfather’s stories, Bob established Deer Track Farm in 1979 with his wife, Shirley, and their children.

From the word go, the farm has incorporated leading industry tools and technology to assure superior standards. Registered Herefords were introduced in 1996, and to grow the herd, Bob flushed high-end cows and transferred the embryos into his commercial cow herd. Five Deer Track Farm bulls have been accepted into the AHA’s National Reference Sire Program. Bob is one of the original 40 Gold Whole Herd Total Performance Record (TPRTM) breeders and has been recognized as a Gold TPR breeder every year since the program’s inception. Naturally, he achieved Platinum TPR breeder status in the fall of 2020.

Bob joined the Virginia Hereford Association (VHA) in 1997 and served on the board for 18 years, seven of which he held the role of president or vice president. He spearheaded and managed the VHA’s Bull Development Program, which has tested over 800 bulls since 2001 and has increased the marketability of Hereford bulls in Virginia. He also produced a historical video featuring original charter members of the 1968 Virginia Polled Hereford Association.

In 2017 Deer Track Farm hosted both a VHA Field Day and a Certified Hereford Beef® Field Day, where the Sysco® sales team learned about beef production firsthand. With conservation a priority, the farm is part of the United States Department of Agriculture Conservation Easement Program to ensure land will not be subdivided and developed. Deer Track Farm was recognized with the Clean Water Farm Award in both 1994 and 2013 by the Commonwealth of Virginia’s Department of Conservation and Recreation and was honored as the 1994 Conservation Farmer of the Year for Spotsylvania County.