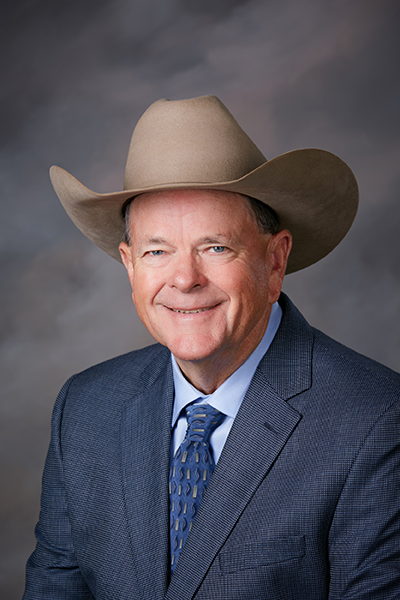 
Richie Oakes of Taloga, Okla., was raised on a 600-head registered and commercial cattle operation that included wheat and hay production. Now the fourth generation to work his family’s land, he is co-owner and manager of his family’s same ranching operation, OK Angus Ranch, which is nationally recognized for raising and feeding high-grading cattle as proven through feedlot data.

In 2006 he and his wife, Marylu, achieved their lifelong dream of re-establishing the Vanderwork Herefords brand. With the help of Scotty and Cindy Vanderwork, the family returned to their roots of raising registered Herefords that are functional and eye appealing — a tradition established by Richie’s father-in-law in the 1930s. With a focus on producing competitive show cattle which still meet the demands of beef consumers, the operation maintains a registered herd of 75 cows, six donor cows and approximately 30 recipients. Vanderwork Herefords has received an AHA Hereford Bull of the Year award and has twice been named Oklahoma Hereford Breeder of the Year.

An Oklahoma State University graduate, Richie was on the livestock judging team and received a degree in agriculture. Before returning home, he taught vocational agriculture for four years. Today, he enjoys judging cattle shows from the local to the national level. The Oakeses raised their son, Matt, and daughter, Ashley, in the farming and ranching industry and are now the proud grandparents of six grandchildren with whom they share their Christian values and love for Hereford cattle.