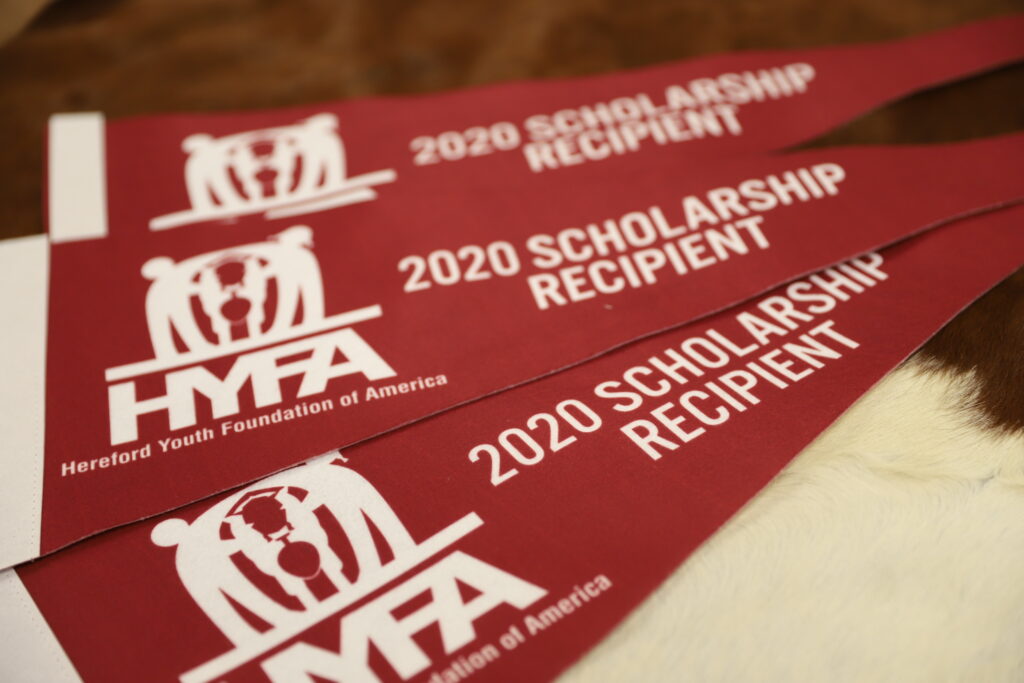 These scholarships represented 10 of the 24 awarded through the Hereford Youth Foundation of America (HYFA) this fall, totaling more than $150,000.

The last five years, the Vanier Family of CK Ranch in Brookville, Kan., has committed more than one half a million dollars to HYFA and helping Hereford youth pursue higher education and reach their full potential.

Tyler Allan is the son of Dave and Becky Allan and a junior at Texas Tech University, majoring in animal science. Tyler grew up raising and showing purebred Hereford cattle and has competed at the Junior National Hereford Expo (JNHE), where he was named champion senior showman in 2018. He was a member of Team USA at the 2020 World Hereford Conference Young Breeders Competition. Tyler has also served as a mentor to younger showmen through the Stock Show U clinics along with providing one-on-one showmanship lessons.

Noah Benedict is a junior at the University of Illinois at Urbana-Champaign. He is the son of Chad and Becky Benedict and is currently serving on the NJHA board of directors. Noah has been a member of the Illinois Junior Hereford Association for the past eight years and assisted with facilitating the 2020 Illinois Junior Hereford Preview Show. He was the recent summer sales intern for Earlybird Feed & Fertilizer.

Austin Cook is the son of Bryan and Jennifer Cook and is a senior at the University of Arkansas studying agricultural business. He was active in 4-H and FFA growing up. He placed in the top six in the National FFA Talent Contest and was awarded first place in the Arkansas State 4-H beef record book contest. He received the 11th Grade Junior Golden Bull award in 2016.

Blakelee Hayes, a junior at Oklahoma State University, is studying agricultural business with a concentration in accounting. Blakelee is the daughter of Jennifer and the late Jeff Hayes and has shown cattle at the local, state and national levels since 2008. She is a member of the Oklahoma Junior Cattlemen’s Association and the NJHA.

Dixie Miller is a senior studying animal science and agricultural communications at the University of Arkansas. She is the 22-year-old daughter of Christy Westlin. Dixie has been an active member of the NJHA, has served as an ambassador for the JNHE and has attended the Faces of Leadership Conference. Dixie was selected as the 2019 Hutchinson Community College Young Female Kansan of the Year while concluding her junior college livestock judging career.

Regan Mitchem is the daughter of Wayne and Crystal Mitchem. The 19-year-old freshman at North Carolina State University is majoring in animal science with plans to attend veterinary school. Regan was a 2019 NJHA Junior Golden Bull recipient and in 2018 earned first place in the intermediate illustrated speech contest at the JNHE. She is also a member of the 2019 North Carolina State 4-H Livestock Judging Team.

Ralston Ripp is the 20-year-old daughter of Cody and Ronette Heinrich. She is a junior at the University of Nebraska double majoring in animal science and agribusiness with a minor in Nebraska Beef Industry Scholars. Ralston is serving on the NJHA junior board of directors. She helped establish the Kearney FFA Chapter at her high school in 2016 and currently is assisting the members and supporting the program.

Libby Rushton is the 19-year-old daughter of Lee and Andrea Rushton. The freshman at the University of Tennessee is studying agricultural business. Libby is serving on the NJHA board and was the first runner-up in the National Hereford Queen contest. She was a participant in the Tennessee Governor’s School for the Agricultural Sciences and was valedictorian of her class at Waverly Central High School.

Megan Underwood is a senior at Kansas State University majoring in animal sciences and industry with an emphasis in communications and marketing. The 20-year-old daughter of Doug and Darrelyn Underwood is planning to attend graduate school to earn a master’s in communication and agricultural education after receiving her bachelor’s degree. Megan was a member of the champion 2020 National Western Stock Show Meat Judging team and the winner of the 2020 JNHE senior illustrated speech contest.

Rusty Wolf is a sophomore majoring in animal science at the University of Kentucky. Rusty grew up raising and showing cattle and was an active member in his 4-H club and FFA chapter. He served as an intern for the Campbell County Cooperative Extension Office under the agriculture and natural resources agent. Recently, Rusty worked at the university’s beef research and education center.