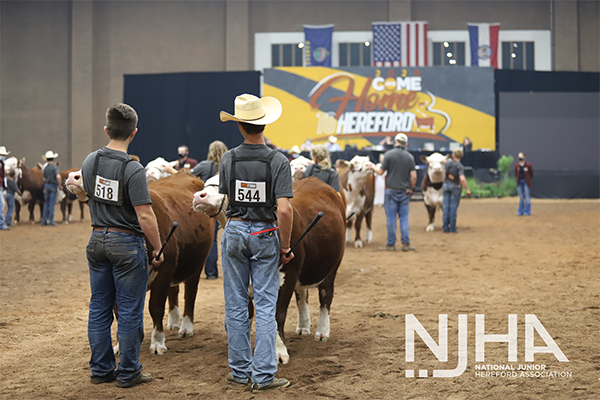 KANSAS CITY, Mo. – In addition to exhibitions, Hereford youth competed in numerous special contests during the 2020 VitaFerm® Junior National Hereford Expo in Kansas City. These contests awarded young people both individually and as groups for their dedication to Hereford cattle and to honor their successes throughout the JNHE.

Winning the GKB Super States contest were the states of Colorado and Texas. Split into small states (less than 25 head of cattle shown at the JNHE) and large states (more than 25 head), members earn points for their state from placings in the showring and in other contests throughout the JNHE. Colorado won the small states division and Texas won the large states category. The GKB Super States contest is sponsored by GKB Cattle, Waxahachie, Texas.

Receiving the Golden Pitchfork award for stall maintenance and cleanliness were the youth exhibitors from the state of Oregon. The champion produce-of-dam group was exhibited by Jacob Sims, Edmond, Okla., with Kynsleigh Krebs, Gordon, Neb., exhibiting the reserve grand champion. The champion pair was sired by MCKY Destiny 6458 ET and the reserve pair was sired by SULL TCC Harley 4069B ET.