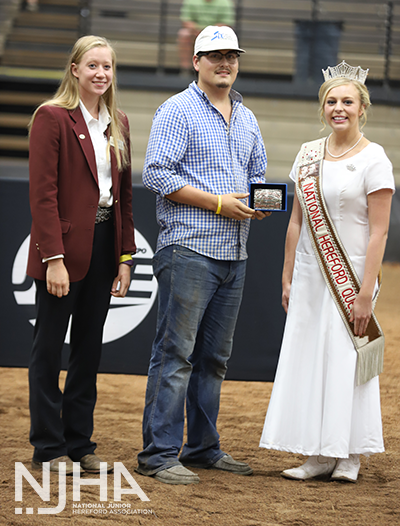 KANSAS CITY, Mo. – Parker Cantrell, Collinsville, Okla., was honored as the 2020 Hereford Junior Herdsman of the Year on July 15 during the 2020 VitaFerm® Junior National Hereford Expo (JNHE) in Kansas City, Mo. He was awarded a $2,500 scholarship sponsored by the Hereford Youth Foundation of America (HYFA) and Sullivan Supply.

Cantrell is the 21-year-old son of Steve and Michelle Cantrell and attends Oklahoma State University. After graduating college Cantrell plans to return home and help his family expand C3 Cattle Co. He is a member of the Junior Hereford Association of Oklahoma and currently serves as the president. One of his favorite things about being a member or the National Junior Hereford Association is seeing the excitement on the faces of young members as well as cultivating the next generation of Hereford enthusiasts. He attended his first JNHE in 2008 and this year Parker came home to where it all began — Kansas City.

“Being named the 2020 Herdsman is a big deal for me,” says Cantrell. “Being considered in the same group of people like Jason May, Jackson Neil and especially Cameron Curry — who I have looked up to for years — is such a huge honor. Even being listed in the same group as Logan, Burk and Ethan is really an honor because we’ve all been in it for a long time. I just couldn’t be happier right now.”