Adding Value at Every Step: AHA Announces New Opportunities for 2020 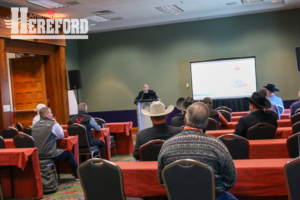 SAN ANTONIO — The American Hereford Association (AHA) is capitalizing on the documented strengths of Hereford genetics to provide new opportunities for cattle producers looking to improve their marketing and management.

“As the U.S. cowherd continues to improve in quality, the American Hereford Association is committed to providing more opportunities to market superior genetics,” says AHA Executive Vice President Jack Ward. “It is our responsibility not only to equip producers with the best genetics the industry has to offer but also the best tools.”

Ward noted that breeders have made vast strides in genetic improvement. For instance, since 2008 Hereford breeders have improved calving ease by 17%, growth traits by 20%, 86% in ribeye area and 150% in marbling.

“It’s time for the industry to come home to Hereford,” said Ward. “We have much to offer the commercial industry.”

Producer interest in the Premium Red Baldy program increased noticeably in the past year, according to CEO Tom Brink of the Red Angus Association of America (RAAA), which partners with AHA in the program. After launching in 2018, enrolled females are now hitting the marketplace.

“People are looking for a good British crossbred female that is loaded with hybrid vigor and offers a lot of different mating options,” Brink says. “The future of our industry is with documented cattle… The genetic requirements of this program provide a level of documentation that this industry needs and wants.”

Designed to develop premium replacement females utilizing the best traits of both Hereford and Red Angus, Premium Red Baldy is offered by the only two breed associations with genetic evaluations backed by mandatory whole herd reporting.

The AHA is now offering a unique opportunity for Hereford producers to access more marketing outlets for their feeder cattle through a partnership with S= Cattle Company, a cattle-buying business owned and operated by Nolan Stone and based in Eaton, Colo.

AHA field representatives will locate and source Hereford-based feeder cattle to be marketed through Stone, with the aim to increase marketing avenues for commercial Hereford producers — and drive additional value for the breed. Both parties will also help locate backgrounding opportunities for feeder cattle and will organize locations across the country to pull small loads of cattle to get them weaned, vaccinated and sorted into marketable, uniform groups.

“The American Hereford Association is excited to announce this innovative partnership with a long-established expert in sourcing and feeding high-value feeder cattle. Combining Nolan Stone with our talented field staff, we gain momentum in driving more value for Hereford and Hereford-based genetics,” Ward says.

In response to industry demands for cattle backed by documentation, the Hereford Advantage feeder cattle marketing program now incorporates vaccination history, BQA certification and genetic verification components, as well as source and age verification. With the credibility of IMI Global’s third-party oversight, the Hereford Advantage is a vehicle to get information to buyers while giving producers using the best genetics and proper management techniques a voice in the marketplace, according to Doug Stanton, vice president of sales and business development at IMI Global.

“Anything we can do that can give a better idea of the potential performance of the cattle both from a carcass standpoint and from a feeding standpoint, for the buyers, is creating value for them and creating less risk,” Stanton says. “If we can provide more information to [buyers], they’re more apt to bid on those cattle because they know more about them.”

The program’s genetic component requires a minimum of 50% Hereford genetics, a bull battery ranking in the top 50% of the breed for the CHB$ profit index and transferred ownership.

“The requirements and components of this program really help to add value to these cattle to gain confidence from buyers, and we’re excited to see this program grow,” says Trey Befort, AHA director of commercial programs.

To continue strengthening the AHA’s genetic evaluation, the Association has partnered with HRC Feedyards, Scott City, Kan., to offer the Hereford Feedout Program to collect valuable carcass data. Beginning mid-December 2019, approximately 300 head were placed on feed representing producers from eight states. The program also provides producers with a powerful tool to learn more about their genetics.

Now in its fourth year, the National Junior Hereford Association Fed Steer Shootout 2020 contest has 119 steers entered from 34 junior members representing 14 states. With the support of BioZyme Inc., the Fed Steer Shootout provides junior members with a unique, learn-by-doing educational experience about the cattle feeding industry as well as scholastic opportunities. Texas Star Dance Cattle Co., has also committed to support the advancement of the program.

The AHA is excited to announce a new partnership with Merck Animal Health to educate members and cattle producers on the importance of strong genetic and animal health programs. Through the partnership, Merck will lead educational sessions at the AHA’s Annual Membership Meeting and Conference and the Junior National Hereford Expo, as well as cohost regional producer meetings to promote proper herd health management.

In October 2019, the AHA unveiled its new national ad campaign, “Come Home to Hereford.” The campaign’s goal is to promote the advantages of Hereford genetics in commercial herds, supported through a series of studies showing the economic advantages of the breed. The AHA partnered with Grant Company, St. Joseph, Mo., to develop and grow the campaign.

The AHA’s continued efforts to equip cattlemen and women for success are bringing a growing number of producers home to Hereford.

The American Hereford Association (AHA), with headquarters in Kansas City, Mo., is one of the largest U.S. beef breed associations. The not-for-profit organization along with its subsidiaries — Certified Hereford Beef (CHB) LLC, Hereford Publications Inc. (HPI) and American Beef Records Association (ABRA) — provides programs and services for its members and their customers, while promoting the Hereford breed and supporting education, youth and research. For more information about the Association, visit Hereford.org. For pictures and additional news releases, visit www.hereford.org/media.