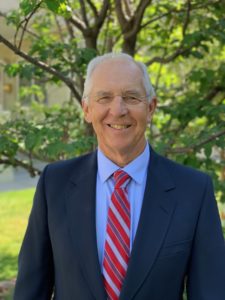 Steve and his wife, Jann, started Merry’s Green Meadows (MGM) in 1982. The operation calves about 40 cows — 99% of which are bred via artificial insemination (AI) or embryo transfer (ET). The Merrys market bulls in the Iowa Beef Expo, the Wisconsin Hereford Association Sale and the Midlands Bull Test. They hold a semiannual production sale — Generations, a Family Affair Sale — with Tod and Sondra Brancel and Ben and Gayle Brancel in Endeavor, Wis., in October. They also sell freezer beef and hold private sales off the farm. The Merrys’ goal is to produce sound, profitable Herefords for breeders and a tasty, high-quality product for consumers.

A lifelong Hereford breeder with a career as a cardiologist, Steve was born into the fourth generation of Merry Hereford breeders in Richland Center, Wis., which is also the birth place of the Wisconsin Polled Hereford Association (WPHA). His grandfather, William Merry, was a founding member and first president of the WPHA. Growing up on his parents’ farm, then dubbed MGM after Marian and Gordon Merry, Steve loved showing Herefords and working with cattle and has been devoted to the Hereford industry for the last 37 years. He had a 10-year break from the business while attending medical school and completing an internal medicine residency and a cardiology fellowship. After his medical training, he and Jann raised their kids – Matt, Ginger and Dan — and now two grandchildren on their farm, breeding, showing and marketing Herefords.

In his junior career, Steve was president of the Wisconsin Junior Hereford Association (WJHA) and was a delegate to the AHA Annual Meeting. He continues to be active in the WJHA by serving as an adult supervisor of the team marketing and speech contests. As an adult Steve has served multiple terms on the Wisconsin Hereford Association board of directors and two terms as president. He has also been a delegate for Wisconsin to the AHA Annual Meeting.

As a physician, Steve has been director of echocardiography labs and cardiac rehab and president of the medical staff at Community Memorial Hospital. He has also been on the board of directors of Falls Medical Group for 20 years. These positions have given him experience dealing with budgets and employees and working with planning and development. Steve has been recognized as one of the best doctors in the Milwaukee area for the last four years running as selected by his peers and published in the Milwaukee Lifestyle Magazine. Steve is now approaching retirement from medicine but definitely not from Herefords.