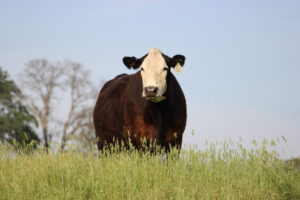 Weight gain is almost a national obsession the first few months after the new year, and while humans may be most interested in dropping pounds, cattle breeders are more concerned with helping cows maintain a good body weight at a reasonable cost.

First, a bit of background: Considerable research exists indicating that a simple crossbreeding system can result in improved cow longevity and fertility compared to a purebred or straight bred system. In fact, years of crossbreeding studies conducted at the Meat Animal Research Center showed an average improvement in weaning weight per cow when a simple two-breed rotation was used with bos Taurus breeds such as Hereford and Angus. This advantage is known as heterosis or hybrid vigor.

Another potential benefit of crossbreeding, and one often overlooked, is to select the second breed in the crossbreeding system based on inherent characteristics that might reduce costs or improve income in the operation. The idea of selecting breeds that “compliment” one another in this way is known as “breed complimentarity” in the animal breeding world.

The OSU researchers broke the study into two phases: Maintenance energy requirements and voluntary feed intake. How well do black baldy cows retain body condition compared to Angus cows? What is the forage intake difference between the black baldy cows and the straight Angus cows?

“As cattle producers know, cow-calf operations need to have pregnant cows that are able to maintain a good body condition through the relatively harsher winter months while also providing needed nutrients to the as-yet-unborn calf inside them,” Lalman said. “If the cows can do that while consuming fewer nutrients, the reduction in input costs provides an advantage in annual cow costs.”

“On average, we measured just under 2 pounds per day less moderate quality forage intake in the crossbred cows,” Lalman said. “On an annual basis, the black baldy cows would be expected to consume about 725 pounds less forage.”

And that has led to an interesting consideration for cow-calf producers: Some of the more productive native range in Oklahoma produces about 3,000 pounds of forage per acre. However, studies by rangeland ecologists have led to recommendations that cattle producers should aim for only about 25 percent consumption of available forage by livestock per acre. Do the math: 25 percent of 3,000 pounds is 750 pounds.

“By using the crossbred female and taking advantage of lower feed intake and maintenance requirements of Hereford cattle in our crossbreeding system, we should be able to increase stocking rate or reduce the number of acres required by about one acre per cow-calf unit,” Lalman said.

The OSU animal scientist stressed nobody is saying that raising purebred animals is a bad thing as there are many reasons to do so. However, simple, planned crossbreeding systems using breeds that complement one another can reduce the cost of maintaining a cow herd and increase ranch output through improved longevity and fertility.

“Raising livestock is not, nor has it ever been, a one-size-fits-all solution,” Lalman said. “Cow efficiency is one more important feature in the cattle producer’s toolbox, relative to the decision-making process.”