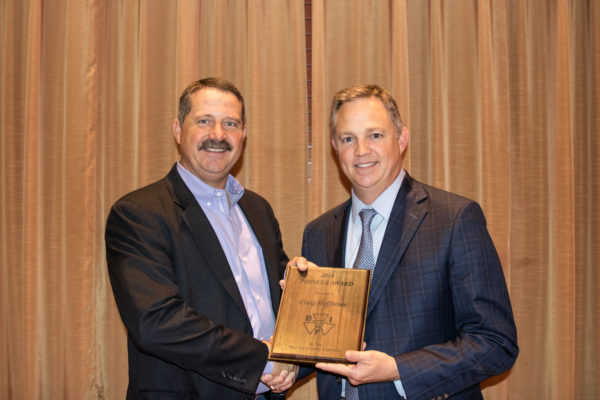 LOVELAND, Colorado – The Beef Improvement Federation (BIF) presented Craig Huffhines, Amarillo, Texas, the BIF Pioneer Award June 21 during the group’s annual meeting and symposium in Loveland, Colorado. The award recognizes individuals who have made lasting contributions to the improvement of beef cattle, honoring those who have had a major role in acceptance of performance reporting and documentation as the primary means to make genetic change in beef cattle.

A native Texan, Craig received his undergraduate degree in animal science from Texas A&M University. He was then recruited to Colorado State University (CSU) by Dr. Gary Smith to work on a study that showed the feedlot performance of Hereford-influenced cattle and palatability characteristics of Hereford beef. He was project leader for the CSU Hereford study, which formed the basis for the CHB program.

Craig served as executive vice president of the American Hereford Association (AHA) from 1997 to 2015. He initially joined the AHA staff in 1992 upon completing a master’s degree at CSU. His early responsibilities included director of feedlot and carcass programs for AHA’s Certified Hereford Beef® (CHB) program. He was named CHB director in 1995, launching a fully aligned, breed-specific, branded beef program into the retail and foodservice sectors.
“Craig has never been afraid of a challenge, and has been a real advocate for breed improvement and technology within the beef industry,” says Jack Ward, AHA executive vice president and BIF board member.

Under his leadership, AHA implemented the Whole Herd Total Performance Records (TPR) program, developed the National Reference Sire program, moved toward a full multi-trait genetic evaluation, led the development of a Pan-American genetic evaluation and led the movement toward incorporating genomics to the AHA genetic evaluation.

“In addition to breed improvement tools, Craig’s vision was to make the AHA efficient through technology and utilizing all tools to keep the AHA fiscally strong,” Jack adds.

He has served in several industry leadership capacities, including president of the National Pedigreed Livestock Council from 2003 to 2006, chairman of the BIF Emerging Technology Committee from 2004 to 2007, chairman of the U.S. Beef Breeds Council and a member of the National Cattlemen’s Beef Association (NCBA) National Animal Identification working group and USMARC advisory committee.

“Craig has been a true pioneer in the beef industry and his leadership roles at the AHA pushed the membership to focus on breed improvement tools that would make the commercial industry more profitable,” Jack says.

Craig is currently executive vice president of the American Quarter Horse Association. Craig and his wife, Mary Jon, are the parents of three sons — Seth, Cole and Miles.

More than 600 beef producers, academia and industry representatives were in attendance at the organization’s 50th annual convention. BIF’s mission is to help improve the industry by promoting greater acceptance of beef cattle performance evaluation.
For more information about this year’s symposium, including additional award winners and coverage of meeting and tours, visit BIFconference.com. For more information about BIF, visit Beefimprovement.org.

The Beef Improvement Federation (BIF) is an organization dedicated to coordinating all segments of the beef industry — from researchers and producers to retailers — in an effort to improve the efficiency, profitability and sustainability of beef production. The organization was initiated almost 70 years ago to encourage the use of objective measurements to evaluate beef cattle. Continuing the tradition, BIF is now the clearinghouse for developing standardized programs and methodologies for recording of performance data for all traits, from birth weights to carcass traits. Its three-leaf-clover logo symbolizes the link between industry, extension and research.