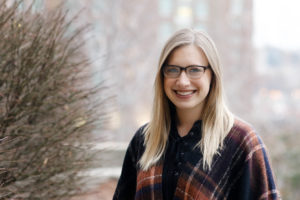 As director of communications and public relations, Davis will coordinate marketing and promotion for the AHA. She will also contribute to the AHA website and weekly communication to Hereford producers.

“We are excited to have Kendra join the AHA staff,” said Jack Ward, executive vice president of the American Hereford Association. “Even as a recent graduate, she comes to the AHA with a wealth of experience and knowledge of the seedstock cattle industry.”

Davis grew up near Glenville, Minn., on her family’s cow/calf operation where they raise crossbred and purebred Shorthorn cattle. She and her sister have also shown cattle on the local, state, and national levels.

Davis is a 2017 graduate of South Dakota State University with a degree in agriculture communications and minors in animal science, advertising and journalism with an emphasis on social media.

Davis was previously involved with the American Junior Shorthorn Association (AJSA) and served as the vice president on the AJSA board of directors. She has had an abundance of experience with communications in the agriculture industry through internships with the National Western Stock Show, the American Royal, the South Dakota Cattlemen’s Association, the South Dakota Prime Time Gala, the AK-SAR-BEN Stock Show and Hormel Foods. Additionally, Davis has worked freelance for industry clients through Kendra Marie Photography & Design.

“These experiences have not only allowed me to broaden my skill set, but they have also helped me to realize my strong passion for agriculture and communications,” Davis said. “I am excited to join Team Hereford and be a part of a breed that has so much history in the industry. I have already met so many great people in the breed; I look forward to representing the AHA.”

Davis started her position with the AHA on Dec. 18.

The American Hereford Association, with headquarters in Kansas City, Mo., is one of the largest U.S. beef breed associations. The not-for-profit organization along with its subsidiaries — Certified Hereford Beef (CHB) LLC, Hereford Publications Inc. (HPI) and American Beef Records Association (ABRA) — provides programs and services for its members and their customers, while promoting the Hereford breed and supporting education, youth and research. For more information about the Association, visit Hereford.org.